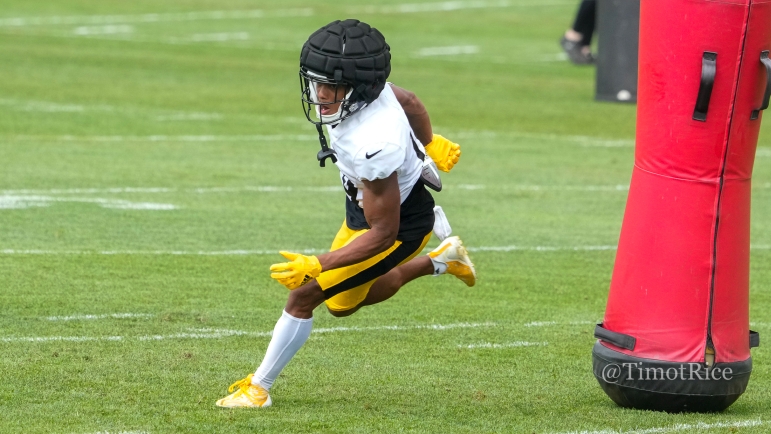 The Pittsburgh Steelers got a lot of production from their 2022 rookie class, with quarterback Kenny Pickett, wide receiver George Pickens, undrafted rookie Jaylen Warren and defensive lineman DeMarvin Leal all playing big roles for the team. By the end of the year, linebacker Mark Robinson and tight end Connor Heyward saw increased roles as well. One rookie who wasn’t out on the field was fourth-round pick Calvin Austin III, who re-aggravated his foot injury after his 21-day practice window to return off IR was opened. As Austin III wasn’t activated off IR within 21 days, he had to miss the season. Despite that, the Memphis product said that mentally, he feels he’ll be ready to step in and contribute immediately in 2023.

“With Coach Tomlin, he is always a guy that, the train isn’t going to stop moving. When we step onto this field, we’re always about getting better and growing. I would imagine that’s what his mindset is, and that’s what my mindset is for myself. I was in all the meetings and out at practice. Of course, I didn’t get those game reps that are very much needed and valuable, but as far as my mindset that’s probably the biggest thing for rookies. The physical aspect of it is important, but the mental is one thing that can really slow rookies in their development. I feel as though I have a good grip on that. I feel like next season that I’ll be right there with them,” Austin said via official transcript provided by the team.

Pittsburgh could certainly use production from Austin next season, as they got limited production from their two slot receivers in Gunner Olszewski and Steven Sims down the stretch. Sims made a big catch in Week 17 against the Ravens, but he was generally underwhelming with just 14 receptions for 104 yards. Sims and Olszewski saw more work on jet sweeps than in the passing game, which definitely hurt Pittsburgh’s downfield attack.

While Austin has elite speed, running a 4.32 40-yard dash at the 2022 NFL Combine, was massively productive at the University of Memphis, with 137 receptions and 2,202 yards with 19 touchdowns over his last two seasons. Austin had a lot of buzz in training camp, but we never saw him in action as he was injured prior to the preseason. There’s still a lot of unknown around Austin due to that, which makes relying on him to be a major contributor in 2023 a hard thing to do.

Obviously, the team has a better idea of what they’re going to get out of Austin next year, but from an outsider’s perspective, it would make sense to add a veteran slot receiver this offseason just in case Austin isn’t quite ready to take over as the starter in the slot next year. The fact that he was around the team and in meetings and soaking up knowledge is important and bodes well for him being able to contribute, but the lack of any game reps means it’s going to be tough to rely on him for any sort of major role.

Regardless, I’m excited to see Austin play. The early buzz coupled with his burner speed makes me excited about the potential of a vertical offense with Austin on the inside with George Pickens and Diontae Johnson on the outside. While it makes sense for the team to add someone from outside the organization, the hope is Austin can prove that he’s ready to go and is able to produce immediately. If he does, he could make the 2022 rookie class even more potent and make Kevin Colbert’s last draft prove to be one of his most successful.