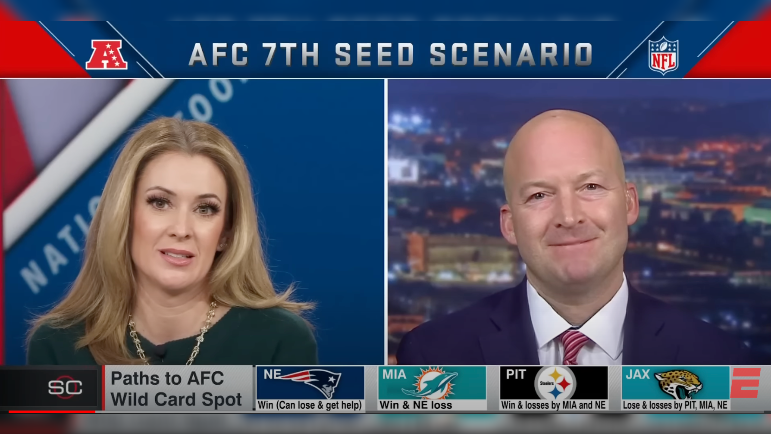 A few short months ago, the Pittsburgh Steelers were 2-6 entering the Week 9 bye week and looked like they were dead in the water.

Then, after a much-needed week off to regroup and self-scout, the black and gold turned things around in a big way, going 6-2 in the last eight weeks to get to 8-8 on the season entering Week 18 with a real shot at reaching the AFC playoffs once again under head coach Mike Tomlin.

Not only that, the Steelers have a shot at extending Tomlin’s non-losing seasons streak to 16 seasons in his career, an impressive accomplishment in its own right after starting out at 2-6.

Following a huge last-second 16-13 win over the Baltimore Ravens on Sunday Night Football at M&T Bank Stadium in Week 17, the Steelers now have a very real shot at reaching the playoffs. On top of needing to beat the Cleveland Browns in Week 18 at Acrisure Stadium, the Steelers need wins or ties from the Buffalo Bills and New York Jets in their games in Week 18 in order to secure an AFC playoff spot.

For ESPN’s Tim Hasselbeck, who appeared on ESPN’s SportsCenter after Sunday Night Football, the Steelers have arguably the best path to reach the playoffs of the New England Patriots, Miami Dolphins and Jacksonville Jaguars.

“I look at Pittsburgh and I certainly do not hate their path — at all,” Hasselbeck stated on SportsCenter, according to video via the ESPN YouTube page. “Part of the reason is…look, this team wasn’t even on my radar of making a run. I’m just being honest, I just didn’t see that happening. But the way that they’ve kind of handled the adversity as Mike Tomlin’s talking about, they have some young players at various positions, and even dealing with some of the adversity that occurs in-game with veteran players having penalties and things of that nature, look, I think they’re playing pretty good football.

“It’s a tough, gritty football team. Mike Tomlin knows how to coach them to wins. And so with that, and you think about who knows what Miami’s situation is gonna look like, and Buffalo at full strength is a better team than New England, so yeah, there is, I think, a very good shot, that Pittsburgh finds their way in.”

The Steelers path is pretty straightforward entering Week 18. Beat the Browns and have the Bills and Jets either win against the Patriots and Dolphins or tie, and the Steelers are into the playoffs.

After starting out at 2-6 and climbing all the way back to having a shot at the playoffs is rather remarkable overall, especially in a transitional year from the franchise overall, with changes in the front office and on the roster.

As Hasselbeck stated, it’s a gritty, tough football team that figures out how to win games in the closing moments. That’s huge for a team that is rather young overall and is going through a significant transitional period overall. That’s a credit to the coaching job that Mike Tomlin continues to do day after day.