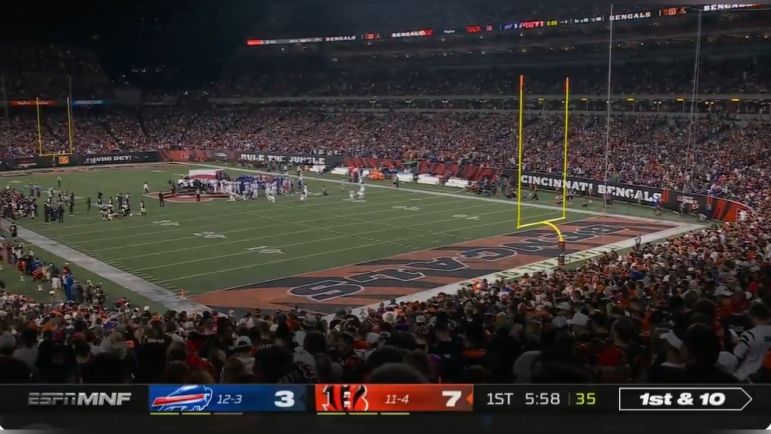 UPDATE (1:28 PM): The Bills have offered another update, tweeting Hamlin spent Monday night in the ICU at a University of Cincinnati Medical center. He remains there today.

Damar Hamlin spent last night in the intensive care unit and remains there today in critical condition at the University of Cincinnati Medical Center.

We are grateful and thankful for the outpouring of support we have received thus far.

UPDATE (11:45 AM): The Hamlin family has released the following statement.

UPDATE (7:27 AM): Hamlin suffered cardiac arrest after taking a hit to the chest Monday night. His heartbeat was restored on the field. He remains in critical condition.

Safety Damar Hamlin suffered a cardiac arrest Monday night and his heartbeat was restored on the field, the Bills said in a statement. He remains in critical condition.https://t.co/qhYmYI3hed

“Please continue to pray for Damar and his family. We currently have no update at this time. Will ask that you keep the family in your prayers.“

And a UC Hospital spokesperson says they don’t expect to make an update on Hamlin’s condition tonight, contradicting an earlier report.

UPDATE (10:39 PM): Per a tweet from Jordon Rooney, Hamlin’s friend and marketing representative, Hamlin’s vitals are “back to normal” and doctors are running additional tests.

His vitals are back to normal and they have put him to sleep to put a breathing tube down his throat. They are currently running tests.

We will provide updates as we have them.

An incredibly scary moment in tonight’s Monday night game between the Buffalo Bills and Cincinnati Bengals. Bills’ safety and Pittsburgh native Damar Hamlin was seriously injured in the first half after making a tackle, stretchered and taken off the field by ambulance. According to multiple reports, he was administered CPR while on the field for an extended period of time.

Hamlin initially made the tackle on WR Tee Higgins and got to his feet. But he fainted moments after and was on the ground until taken off on a stretcher. The game has been “temporary suspended” by the officiating crew with both teams heading back to the locker room. There was 5:58 left in the first quarter when Hamlin’s injury happened. It occurred at 8:55 PM in real time.

The NFL has not given official word if the game will continue later tonight but it’s extremely difficult to see this one played out.

UPDATE (10:01 PM): ESPN reports the Bills/Bengals game has officially been suspended and will not resume tonight. No makeup date has been announced but that is obviously secondary to Hamlin’s health.

The NFL has suspended the game between the #Bengals and #Bills in light of the frightening injury to Damar Hamlin, according to John Parry on the broadcast. It will not be resumed tonight.

The NFL has released the following statement on Hamlin, saying he is in “critical condition” at a nearby Cincinnati hospital.

UPDATE (12:35 AM): The NFL has no current plans as to when they will resume the Bills/Bengals game. The league made the announcement in a conference call early Tuesday morning, saying they will wait until there’s clarity on Hamlin’s health.

The NFL is not considering options for the game moving forward.

The league won’t make a decision until there is more clarity on Damar Hamlin’s health and situation.

Hamlin, 24 years old and a sixth round pick of the Bills in 2021, is a Pittsburgh native. He attended Pittsburgh Central Catholic High School and as a top recruit, committed to the Pittsburgh Panthers to play his college ball. In school, he recorded 275 career tackles with six interceptions. But, of course, football is not the focus tonight. Not anymore.

He started against the Steelers earlier this year when Pittsburgh played Buffalo, making seven total tackles. After a questionable hit on a sliding Kenny Pickett, Mike Tomlin briefly spoke about Hamlin after the game.

Pickett, a teammate of Hamlin at Pitt, said similar.

“I’m fine with Hammy, that’s one of my guys, he’ll be one of my friends for a long time, so we’re competing, it’s all good.”

Moments ago, Pickett sent out this message on Instagram for Hamlin.

For Steelers’ fans, this is reminiscent  of Ryan Shazier’s career-ending spinal injury in 2017. That injury also occurred in Cincinnati, just as Hamlin’s injury did tonight. But based on the reporting, Hamlin’s injury seems even more serious as we await word on his condition. Bills’ players were understandably extremely upset with several players on the field crying as Hamlin was attended to.

An ambulance has taken Hamlin to the local hospital that has a Level One Trauma Center.

We’ll pass along any updates to you throughout the night and we’re sending our best to Hamlin, his family, and his Bills’ teammates.

The thoughts and prayers of all of Bills Mafia are supporting you, Damar. 🙏 pic.twitter.com/lDWNAOEPX4

We send our thoughts and prayers to Damar Hamlin, his family, and the @BuffaloBills 🙏 https://t.co/AC9O9U0h4J

Several Steelers’ players have tweeted their thoughts and support to Hamlin tonight.

Praying for Damar and his family 🙏🏾 such a scary sight to see all that matters right now is his health and staying close to his family.

Praying for you and the fam 🙏🏾 @HamlinIsland

Hundreds of thousands of dollars in donations have been raised to a charity Hamlin sponsored, The Chasing M’s Foundation Community Toy Drive. If you would like to make a donation, you can do so by clicking the link here. It’s already raised well over $1 million.