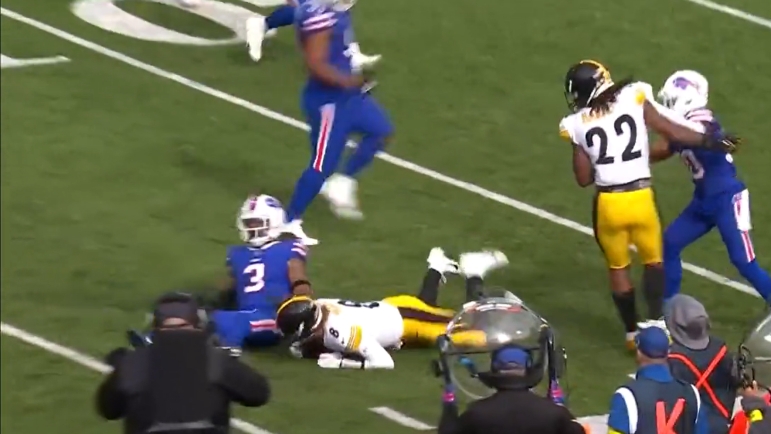 Late in the third quarter of the Pittsburgh Steelers 38-3 loss against the Buffalo Bills, Bills safety Damar Hamlin hit Steelers quarterback Kenny Pickett late. After the play, James Daniels shoved Hamlin, and both Daniels and Kevin Dotson were flagged for unnecessary roughness.

Mike Tomlin took exception to no flag being called on the hit.

“I had a problem that the officials didn’t have a problem,” Tomlin said in his postgame press conference via the Steelers YouTube channel. “I had a problem with the fact it wasn’t officiated the way I anticipated it being officiated.”

Given the nature of the late hit, a flag probably should have been thrown. In the grand scheme of things, it doesn’t matter much because the Steelers were getting smoked and it wouldn’t have made a difference in the game. Still, in a league that preaches how much they care about player safety and the extra emphasis on quarterback safety, it’s surprising that a flag wasn’t thrown.

While Hamlin didn’t make contact with Pickett’s head, it was still a high hit on a sliding quarterback. Nine out of ten times, there’s a flag called on that sort of play, so Tomlin’s frustration is understandable.

Both Tomlin and Pickett said they don’t have any ill will towards Hamlin, who was also teammates with Pickett at Pitt.

“I’m fine with Hammy, that’s one of my guys, he’ll be one of my friends for a long time, so we’re competing, it’s all good,” Pickett added. He and Hamlin briefly talked after the hit, too, and Hamlin patted Pickett on the back.

The run was Pickett’s lone on the day, although he did gain 10 yards. He can clearly use his legs to pick up a few yards, and he had two rushing touchdowns last week. I have a feeling that there are going to be a few more hits that could go either way in regards to a flag when it comes to hits on Pickett when he becomes a runner.

Given the lack of contact to the head, it was ruled a legal hit by the officials, but it was still a late hit. It’s honestly sort of a judgment call when something like that happens at game speed, and Tomlin obviously believes the judgment was the wrong one. In this case, I agree with him. Especially with the added emphasis on player safety, late hits like that one should be called, regardless of the contact of the hit. We’ll see if Hamlin ends up getting fined for the hit on Saturday.