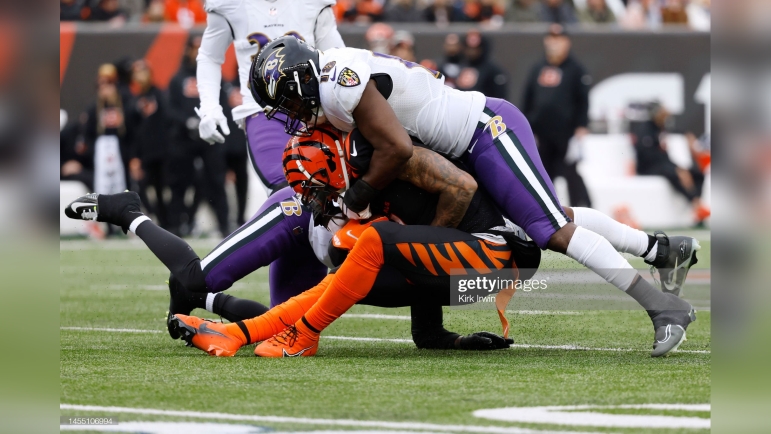 The Baltimore Ravens and the Cincinnati Bengals will face off for the third time this season. In fact, they will be playing two games back-to-back after squaring off in the regular season finale. And there could be some hostilities carried over into this one, at least on the Bengals’ side.

According to The Athletic’s Jay Morrison, a number of Bengals players took issue with the manner in which Ravens players conducted themselves over the course of the game, accusing them of playing dirty and using cheap tactics. “There was a lot of cheap s*** going on”, cornerback Cam Taylor-Britt is quoted as saying, for example. Defensive tackle D.J. Reader noted “some s*** I don’t agree with”.

There was “a lot of late stuff” cited, “dirty stuff you shouldn’t do”, claims of aiming at players’ legs, twisting ankles—things Vontaze Burfict was known for, more or less.

“We owe them”, Taylor-Britt said. Another lineman, Joseph Ossai, tried to hold his tongue more. He stopped himself before saying too much, only to add, “We’ll see ‘em next week. That’s all I’m saying”.

So what do the Ravens think of all this? Well, head coach John Harbaugh dismissed the notion that his team was dirty, as you would expect. “I studied the game really closely, obviously. Anybody can, and it’s clear our players played a clean game, as they always do”, he said on Monday.

That was the extent to which he addressed the matter, but one wonders if it will die there. We’ve seen rivalries within the AFC North take on greater heat amidst allegations of dirty play before, particularly between the Bengals and the Pittsburgh Steelers in the mid-2010s. And of course, there was Myles Garrett.

Not that the Steelers have never had allegations levied against them. Inevitably, all teams have. And I’m not going to pretend that I went over the Bengals-Ravens game with a fine-toothed comb to look for evidence. I honestly don’t particularly care one way or the other. The Steelers are my priority and that game meant nothing to us.

But of course, I would rather be in their position than ours. We’re talking about hope and potential for next season while they’re discussing the potential for bad blood in a game to be played in a few days. It’s going to be a long time before Pittsburgh plays another game.

That will also be true for one of these two teams after this weekend. And AFC North rivals have had a number of opportunities to knock each other out of the playoffs lately. The Browns beat the Steelers a few years ago, for example. Going into this one, it sure feels like the Bengals have the edge unless Lamar Jackson comes back and looks like his old self.