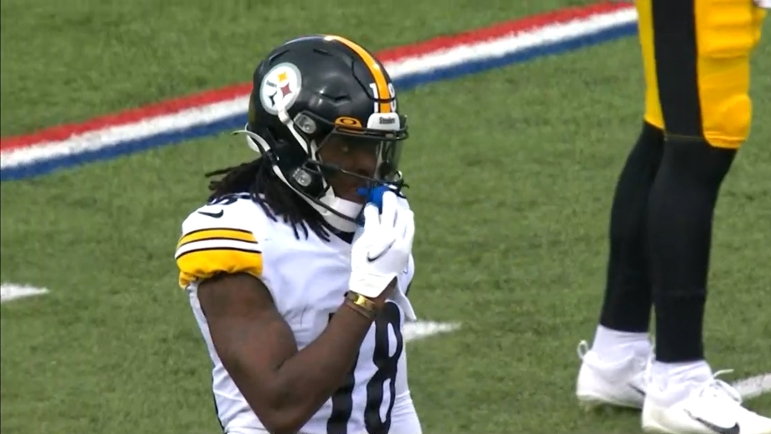 Like millions across the country Monday night, Pittsburgh Steelers wide receiver Diontae Johnson was settling in to watch what was expected to be a great Monday Night Football matchup between the Buffalo Bills and the Cincinnati Bengals.

Johnson, who knows Hamlin well have spent the last four seasons in Pittsburgh, two of which he shared the same facility with the former Pitt Panthers star, told reporters Wednesday during his media session from inside the UPMC Rooney Sports Complex on the South Side that he was “sad and hurt” to see a scary scene with Hamlin down on the field needing CPR.

While Hamlin has shown some signs of progress in recent days, many across the NFL landscape are still reeling from the shocking scene on what appeared to be a routine tackle. Though progress has been made, Hamlin isn’t out of the woods yet, so all anyone can do, according to Johnson, is pray for the Hamlin and his family, hoping that he pulls through.

Diontae Johnson says he knows Damar Hamlin and is praying for him pic.twitter.com/p0nAVziHtF

“Whatever the situation was, it was crazy just seeing it. A lot goes through your mind, but my prayers go out to him and his family,” Johnson told reporters regarding Hamlin, according to video via the Tribune-Review’s Chris Adamski. “That’s all we can do is just pray and hope for the best. I believe, deep down, he’s going to pull through.

“I’ve seen him a couple times, I know him. Always say ‘what’s up’ to him. Just being able to play against him earlier in the season, see how far he came and see how excited he was to play, and then to see what happened to him is sad and it hurt,” Johnson added. “…My faith in God and what He does, I just believe he’s going to pull through. All I can do is keep praying for him.”

That’s really all anyone can do at the moment regarding Hamlin, who remains sedated and on oxygen at the University of Cincinnati Medical Center, the same hospital Ryan Shazier was treated at following his tragic spinal injury in 2017.

By all accounts, Hamlin is an outstanding young man, one that makes an impact everywhere he goes.

People are praying hard for the 24-year-old safety to pull through. Good news is, progress has been made, according to a statement from the Bills and Hamlin’s family. Somehow though, players — after seeing that scary scene unfold — have to somehow get ready to play a game in a few days.

It’s understandable that thoughts are elsewhere outside of the game of football for many.