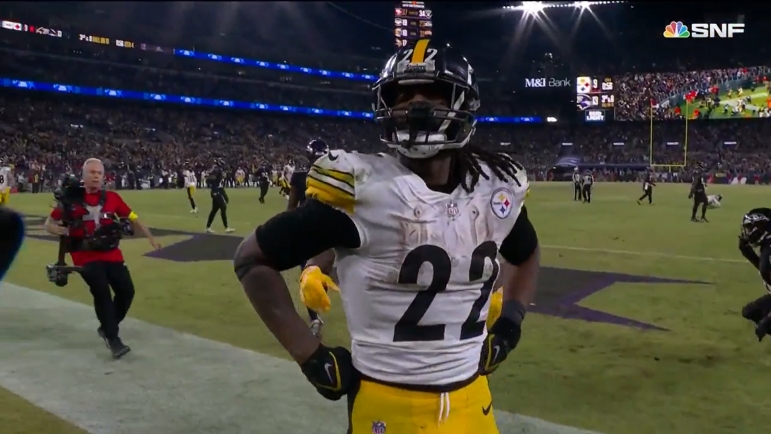 Putting a bow on our Pittsburgh Steelers’ 2022 awards that we’ve cast ballots on over the last weeks. With those results and polling the rest of our Steelers Depot team, here are the award winners and final tallies.

Despite the slow start, Harris – like the rest of the offense – found their stride by the back-half of the year. Getting past a foot injury suffered in the summer, Harris ran downhill and angry while helping to form the Steelers’ ball-control identity. No, Harris didn’t have a great year end-to-end. Few on this offense did so it’s no surprise to see him win the award, emblematic of the team’s dramatic turnaround. Harris had more votes than the rest of the field combined, though it’s nice to see OG James Daniels receive some love here.

An easy choice here and Fitzpatrick’s nine votes made him a leader across these categories. Alex Highsmith had a breakout season but Fitzpatrick finished the year with a career-high six interceptions and called game several times this year. A Pro Bowler and All-Pro, he remains one of the best trades in Steelers’ history.

Pickett won it for the Steelers and he wins it here with six votes. Taking over for Mitch Trubisky midway through Week 4, Pickett had a bumpy start but evened out and even shined by year’s end, leading game-winning drives against the Las Vegas Raiders and Baltimore Ravens. George Pickens was a worthy candidate while Jaylen Warren was fun to watch but Pickett is the future and offers this franchise hope for next year.

A close vote here with Sutton nudging Warren out by one whole vote. We knew Sutton was going to be a starting corner this year but his play was even better than expected and he had a shutdown second half of the season. He’s in line for a major payday this offseason and would be a major blow to the Steelers’ defense if he signs elsewhere. Warren came out of nowhere as an UDFA to become the team’s third-down back who helped keep Najee Harris fresh.

A tie at the top between Witherspoon and Alualu. Witherspoon entered camp as a starting corner but struggled when healthy and spent most of the year on IR with a hamstring injury. Pittsburgh was in no hurry to get him back on the field. Alualu returned after fracturing his ankle but looked like a shell of himself, losing his starting spot to Montravius Adams. He’s played his last NFL down.

A wide variety of votes here with Edmunds receiving one more than anyone else. Signed to a one-year deal right before last year’s draft, Edmunds was a steady starter. Playing in the box more often this year, he pairs well with Minkah Fitzpatrick and has earned a two-year deal to provide at least the illusion of job security. He isn’t flashy, isn’t a playmaker, but solid. His play against Tom Brady in Week 6 was excellent.

A three-way tie for the top spot, Pickett’s two game-winning touchdowns, and Pickens’ sensational Week 3 grab against the Browns. All three plays are deserving. Pickens’ catch was the most visually impressive but Pickett’s offered the most hope for the future. Beat the Ravens on primetime, beat the Raiders on Christmas Eve, those are moments that won’t be forgotten.

Third time’s the charm. The Steelers’ third offensive line coach in as many years, Meyer took the group from a liability into a borderline strength by year’s end. It helped the group stayed healthy and depth wasn’t tested but the group got comfortable with Meyer’s system and teachings and the results showed. The o-line’s growth was a key reason for why this offense improved.

Austin beating out LB Mark Robinson by a vote. Briefly flashing in the summer before suffering foot injuries, Austin will look to get in his first stadium next year. A speedy receiver who hopefully still has it, he could be a big-play weapon this offense needs not to mention an answer in the slot. Robinson could see a consistent defensive role next year while the rest of this list was littered by the remainder of the team’s draft class.

The Steelers’ prize free agent, Daniels got off to a woeful start in camp. But he got comfortable and bought into Meyer’s aggressive pass sets. By year’s end, he was the team’s top offensive lineman and looked every bit worth the contract the team gave him. The line saw lots of love in the voting with center Mason Cole coming in second place. I liked the nod to CB Levi Wallace, too.

The award to the player the team missed the most either due to free agency or injury. A little surprised to see Smith-Schuster beat out Watt but the Steelers lacked a consistent option in the slot, especially after dealing Chase Claypool, though he wasn’t exactly putting on a show prior to the deal. Smith-Schuster was used properly in Kansas City and flourished. Without Watt, the team’s pass rush tanked. A callback to Javon Hargrave also gets a vote. For what it’s worth, he is a pending free agent this off-season.