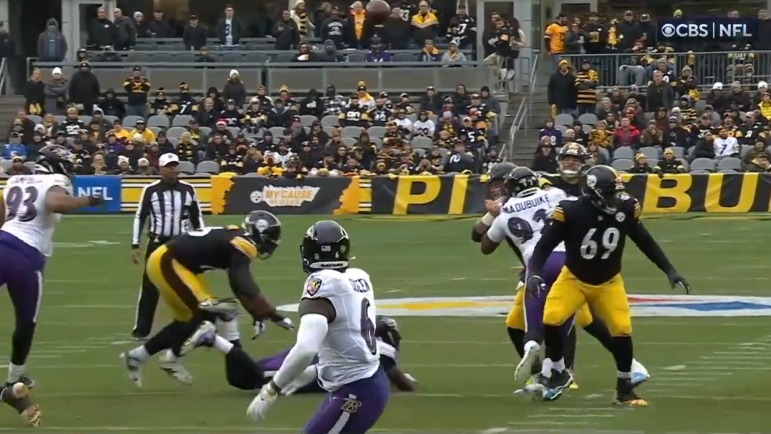 Regardless of the fact that he might be a backup, there is little in the way of excuses for Pittsburgh Steelers quarterback Mitch Trubisky coming off the bench and throwing three interceptions. A sixth-year veteran with several dozen starts under his belt, including in this season, and with playoff experience, there is no way to justify completing so many passes directly to Baltimore Ravens defenders.

Perhaps more troubling still is the fact that he said after the game repeatedly that he didn’t do a good job with his eyes, something that is pretty essential for NFL quarterbacks to be able to do. More specifically, he’s talking about using his eyes to direct the defense, something he didn’t do well by his own admission via the team’s website.

Speaking about the first interception targeting tight end Pat Freiermuth, which was picked off by former teammate Roquan Smith, he explained that the Ravens slowed the tight end’s route down by jamming him. “I stuck with him,” he said, and probably could have “done a better job with my eyes looking off.”

It proved to be a theme, as he cited the same problem on the long interception looking for wide receiver Diontae Johnson down the left sideline, believing that safety Marcus Williams was able to read him and get a jump on the ball—which was overthrown anyway.

“We ended up hitting it later in the fourth quarter going the opposite direction,” he said of the play call. “I just threw it a little too far, and I’ve got to be better with my eyes. It looked like the free safety had a jump on it. That’s why he got over the top there before Diontae did.

“Yeah, I wanted to go down the field, take a shot and was too aggressive, and could be better with my eyes,” he reiterated. During another part of the press conference, he said he could be “a lot better” with his eyes, as well as smarter about checking the ball down, calling it “a learning experience.”

It’s fair to question just how much he should be learning when it comes to things like this, however, when he’s a six-year NFL veteran with 54 starts in 63 games played. He’s attempted over 100 passes this year, so it’s not like he hasn’t played. And he only had two interceptions on the season coming into the day.

He has been clearly more aggressive since he was benched in favor of rookie quarterback Kenny Pickett. That has led to the predictable boom-or-bust play that we have seen out of him in his cameo appearance since, being able to hit more plays down the field but also exposing more passes to high-risk.

But if you can’t direct traffic at the second and third levels of the defense with your eyes, then you’re not going to be able to safely throw the ball down the field, especially not over the middle. I hope Pickett looks over this film and sees what not to do.