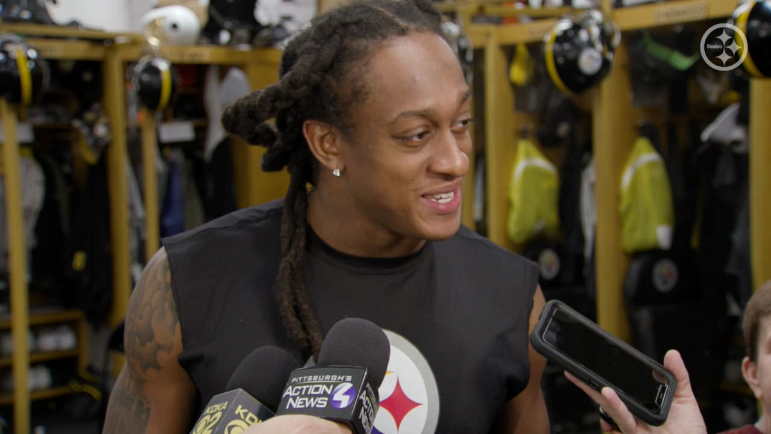 Dating back a decade, the Pittsburgh Steelers can’t seem to figure out how to beat the pesky then-Oakland now-Las Vegas Raiders.

Now, the Steelers will look to not only celebrate Franco Harris’ number retirement and 50th Anniversary of the Immaculate Reception in style on Christmas Eve at Acrisure Stadium in Week 16, but also figure out how to beat the silver and black for just the second time in the last six tries.

For fifth-year safety Terrell Edmunds, who has been part of the last two losses to the Raiders, it’s very simple what the Steelers need to do Saturday night on Christmas Eve against the silver and black: execute.

Really, that’s all it comes down to for Edmunds against the Raiders. Executing late in the game will be key for Pittsburgh as the last two losses have come late in the game. In 2018, quarterback Derek Carr found tight end Derek Carrier for a 6-yard touchdown with 21 seconds left to win the game, and then last season Carr hit former receiver Henry Ruggs III on a 61-yard pass in the fourth quarter, putting the Raiders up nine points before holding on to win.

Speaking with reporters Monday inside the locker room at the UPMC Rooney Sports Complex, Edmunds said the Steelers just need to execute late in the game and know their assignments and roles.

“Execution. At the end of the game. They beat us on like the last place sometimes,” Edmunds stated to reporters Monday, according to video via Steelers.com. “That’s what’s been happening and we just gotta get the win.”

The last two times the Steelers have face Raiders quarterback Derek Carr, they’ve had a relatively tough time slowing him down.

Play of the game. Carr to Ruggs for 61 yard TD. Carr holds Fitzpatrick with his eyes just enough for Ruggs to get behind the defense. #Raidernation pic.twitter.com/cjp3GGuQjn

For Edmunds, it’s not about what Carr has done and can do; it’s about what the Steelers need to do on Saturday night.

“Carr, he’s a good quarterback. I wouldn’t say so much about him. It is just pretty much what we’ve been talking about, our execution,” Edmunds stated, according to video via Steelers.com. “We just gotta execute at the end of the game and we gotta just go out there, play together and make sound calls and execute.”

Sounds easier said than done, and it is. But really, the Steelers have made mistakes late in the last two games against the Raiders.

There was the Ruggs touchdown last season, as well as a 25-yard pass from Carr to tight end Darren Waller up the seam that beat former linebacker Joe Schobert. There was also a 13-yard run on the final drive by the Raiders from Peyton Barber that put the Raiders in scoring position to kick the game-clinching field goal with 20 seconds left.

Here you go. Seth Roberts for 39 yards from Derek Carr over Morgan Burnett late in a Week 14 loss to the Raiders on the road. #Steelers https://t.co/ClBzZU2LTY pic.twitter.com/62iFN4gT29

In 2018, Carr found former receiver Seth Roberts for 39 yards down the middle of the field over Edmunds and former safety Morgan Burnett, eventually setting up Carr’s fourth and goal touchdown pass to Carrier for the win.

The Steelers have been right there in position to win both games. Execution has just lacked down the stretch. Now, entering an emotionally charged matchup on Christmas Eve with Steelers greats in attendance, the Steelers will have to make sure they execute down the stretch and pick up a crucial win against a longtime rival.