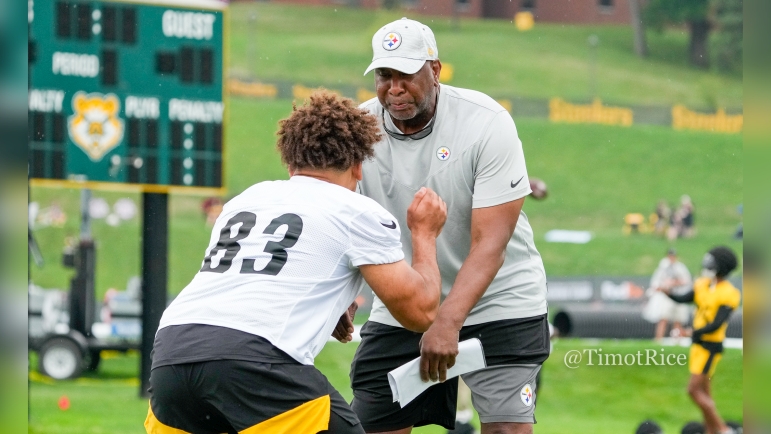 While the season hasn’t panned out the way many Steelers fans have hoped for, there are still several things we can look back on this season in a positive light as the Pittsburgh Steelers close out the 2022 season. Rookie QB Kenny Pickett has shown flashes of being a potential franchise quarterback during the season, leaving excitement regarding how he will finish out the season and build on his rookie campaign in 2023. The same could be said for rookie WR George Pickens who has flashed the traits of a WR1 in his first NFL season, winning contested catch after contested catch while slowly becoming a more well-rounded receiver.

However, one position room that has stood out as a whole this season is the play of the tight ends for Pittsburgh. TE Pat Freiermuth is in the Pro Bowl conversation amid a strong sophomore campaign, posting 53 receptions for 630 yards and two TDs in 12 games played. He currently five games with 75 yards or more on the season and is Pro Football Focus’ second-highest graded TE behind only Travis Kelce.

Pat Freiermuth is now up to the second highest graded TE in the NFL (80.7) – behind only Travis Kelce.

While Freiermuth is the headliner of the position group, the other guys in the room have also seen notable improvement this season, speaking to the work of TE Coach Alfredo Roberts. Roberts was hired by the Steelers back in January of 2021 and was one of the key guys that wanted Pittsburgh to select Freiermuth in the 2021 NFL Draft. Roberts has been a TE Coach and RB Coach during his coaching career in the league, mentoring the likes of Dwayne Allen, Colby Fleener, and Jack Doyle of the Colts, Austin Ekeler and Melvin Gordon of the Chargers, Mercedes Lewis of the Jaguars, and Kellen Winslow II of the Browns and Buccaneers.

This was Steelers' TEs Coach Alfredo Roberts after putting Pat Freiermuth through drills at his Penn State Pro Day.

Afterwards, Freiermuth said he loved Roberts and they had been in contact a lot. Now, he's their pick at #55. pic.twitter.com/x0HfDNMh8W

As you can see, Roberts has had a successful track record wherever he has gone in the past, making his bones as a superb TEs Coach but also helping the combination of Ekeler and Gordon become one of the better backfields in the league during his time as the RB Coach for the Chargers. He’s repeating history with the Steelers, helping Freiermuth develop into a Pro Bowl-caliber TE while helping former draft bust Zach Gentry develop into a capable TE2 and quality blocker in Pittsburgh’s heavy formations. He also has helped rookie TE Connor Heyward make a successful transition to the pros despite being a tweener, making impact plays as a pass catcher this season for Pittsburgh.

TEs Coach Alfredo Roberts might be the most underrated name on Steelers' staff. Turned Pat Freiermuth into a Year One starter. Developed Zach Gentry from fringe roster player into a solid, #2 blocking TE.

Roberts has been an ideal replacement for James Daniel. Strong hire.

While the Steelers have position coaches like DL Coach Karl Dunbar who have helped develop the EDGE and DL groups or RB Coach Eddie Faulkner who have made the RB room a strength in recent weeks, I’d argue that Alfredo Roberts has had the biggest impact on his position room this season for the Steelers, helping each player under his guidance develop and improve relative to their role on the team. Position coaches usually don’t have their praises sung, let alone a TE Coach. However, when we look back on the Steelers 2022 season, we will recognize the quality play of the TE group thanks to the underrated value Alfredo Roberts has brought the team.

What are your thoughts on TE Coach Alfredo Roberts? Do you think that he is Pittsburgh’s most underrated position coach? Do you think he has made a positive impact on the TE room and how do you see him improving the individual players in the room going forward? Please leave your thoughts in the comments section below and thanks again for reading!