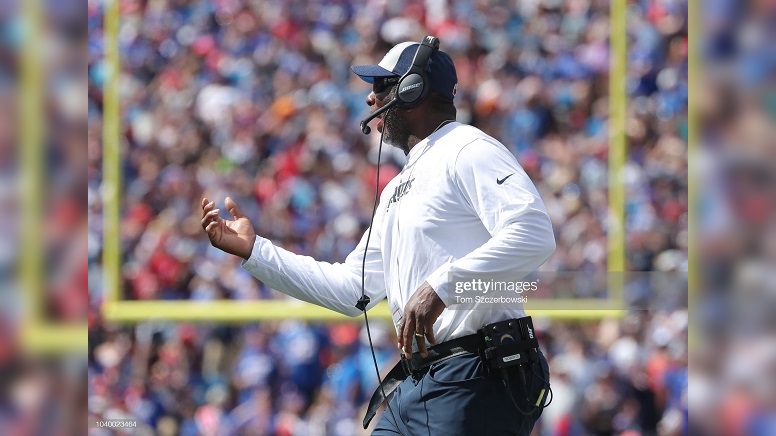 The Pittsburgh Steelers now have a new tight ends coach now, according to the team.

The Steelers announced on Monday that Alfredo Roberts will be their new tight ends coach and thus be the one to replace the recently retired James Daniel.

Roberts, 55, was the tight ends coach of the Los Angeles Chargers last season. Prior to that he was the Chargers running backs coach for three seasons (2017-19) where he coached Steelers’ fullback Derek Watt. Prior to coaching with the Chargers, Roberts was on the coaching staffs of the Jacksonville Jaguars (2003–2006), Cleveland Browns (2007–2008), Tampa Bay Buccaneers (2009–2011) and the Indianapolis Colts (2012–2015).

Roberts played six seasons in the NFL as a tight end with the Kansas City Chiefs and Dallas Cowboys. He was selected originally by the Chiefs in the eighth-round (197th overall) of the 1988 NFL Draft out of Miami, where he played on two National Championship teams.

Below is Roberts bio from his time with the Chargers:

As running backs coach for the Bolts, Roberts instructed running back Austin Ekeler in 2019 to record one of the most prolific receiving seasons by a running back in team history, catching 92 passes for 993 yards and eight touchdowns — ranking second, second and first in team annals by a running back, respectively. Ekeler posted the NFL’s 35th 100-yard rushing / 100-yard receiving game in the Chargers’ victory at Jacksonville in 2019 on just 12 offensive touches — the fewest in a 100/100 performance in NFL history. Roberts coached fullback Derek Watt to earn recognition as a second alternate for the Pro Bowl.

Roberts coached Melvin Gordon III in 2018 to his second Pro Bowl as he posted 1,375 scrimmage yards for his third-straight campaign with at least 1,300 yards from scrimmage while Watt was a third alternate for the Pro Bowl.

In his first season as a running backs coach in 2017, Roberts coached Gordon to become the first Chargers rusher since 2013 to amass over 1,000 yards when he totaled 1,105 yards on the ground. Gordon ranked fourth in the NFL in scoring among non-kickers (72 points). His 1,581 yards from scrimmage were the fifth-most in the league and the most by a Chargers rusher since 2007.

Roberts came to the Chargers after serving as an offensive assistant at Carmel (Ind.) High School, where he helped assist instruction of several offensive positions. In his lone season advising the team, the Greyhounds finished the season on a six-game winning streak to win the 6A State Championship.

As tight ends coach in Indianapolis for four seasons (2012-15), he tutored Dwayne Allen and Coby Fleener to become the first pair of tight ends in NFL history to each have eight-plus touchdown catches in a single season, doing so in 2014. In his Colts tenure, Roberts tutored Allen, Fleener and Jack Doyle.

A native of Fort Lauderdale, Fla., Roberts graduated from the University of Miami, where he was a member of two national championship teams as a tight end. The first came under Howard Schnellenberger in 1983, which also was the school’s first national championship, and the second came in 1987 under Jimmy Johnson. Roberts played on five bowl teams for the Hurricanes, including two Orange Bowls, two Fiesta Bowls and one Sugar Bowl.

Roberts was an eighth-round pick by the Kansas City Chiefs in the 1988 NFL Draft. He spent three seasons with the team before joining the Dallas Cowboys in 1991. Roberts was part of two Super Bowl championship teams in Dallas under the guidance of Johnson in 1992 and ’93. Roberts played in every game for five consecutive seasons until his career ended in 1994 following foot and knee injuries. He finished his career with 50 catches for 476 yards and two touchdowns in 82 career games, playoffs included.

Roberts began his coaching career in 1998 as a member of the inaugural coaching staff at Florida Atlantic University. He spent the first two years recruiting to establish the inaugural season in 2000 when he started coaching the tight ends. Roberts coached tight ends for two seasons (2000-01) before coaching the wide receivers for his last season with the Owls.

In 2003, Roberts accepted his first NFL coaching position as the tight ends coach for the Jacksonville Jaguars (2003-06), coaching tight end Marcedes Lewis as a rookie. It was followed by similar posts with the Cleveland Browns (2007-08) and Tampa Bay Buccaneers (2009-11).

In Roberts’ first season with the Browns, tight end Kellen Winslow II had his first Pro Bowl season after catching 82 passes for a career-high 1,106 yards and five touchdowns. Winslow followed Roberts to Tampa Bay, and in three seasons together there, Winslow caught 218 passes for 2,377 yards and 12 touchdowns. During their first season in Tampa Bay (2009), Winslow’s 77 catches and 884 yards set the franchise’s single-season marks for a tight end.

Roberts and his wife, Angel, have twin sons, Avery and Austin, and one daughter, Alyssa. Alyssa is a sophomore at Long Beach State and Avery is a graduate of Florida Atlantic University. Austin spent a season with the chargers after graduating from UCLA as a three-year letter winner.