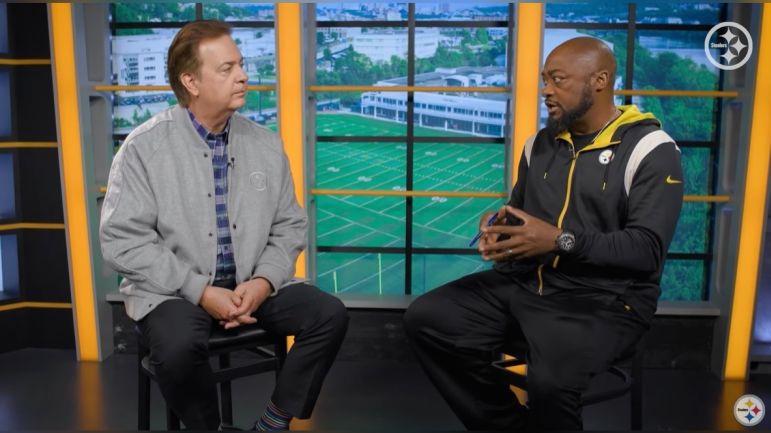 It’s an obvious statement. But it doesn’t make things any less true. To beat the Carolina Panthers and keep their slim playoff hopes alive, the Pittsburgh Steelers must take care of the football tomorrow afternoon. It’s a point Mike Tomlin stressed during the latest edition of his Mike Tomlin Show.

“It’s important that we take care of the ball early on,” Tomlin told host Bob Pompeani. “Seattle turned that ball over early in the game and that was a catalyst of them to play from [ahead]. We gotta move the ball, we gotta possess it, we gotta score.”

In Week 14, the Panthers went on the road and upset the Seattle Seahawks 30-24 in part thanks to them winning the turnover battle 2-0. It started on the first Seattle offensive snap, picked off by talented CB Jaycee Horn on an incredible play, taking away both the short and deep routes and snagging Geno Smith’s pass.

On the other side of the country, Pittsburgh doomed themselves with three costly turnover in their narrow loss to Baltimore. Backup QB Mitch Trubisky tossed three interceptions, two of which came in the red zone/high red zone, taking crucial points off the board in an otherwise close contest. Combine that with a blocked field goal and that was the difference between win and loss. For Tomlin, things that need to be corrected to avoid the same fate. A faster start is also key.

“We do those things the way that we’ve been doing it in recent weeks in terms of how we come out of the locker room we’ll be in position to minimize some of that attrition football that they play.”

Similar to the team’s goal when they played the Atlanta Falcons, building an early lead will be important. Carolina isn’t a team equipped to play from behind or throw the ball from a conventional shotgun. They’re a run team, a playaction team, that wants to keep the game close heading into the fourth quarter. For Pittsburgh, the problem is they rarely win comfortably. Their five wins this season have been by a combined 25 points and only one of those has been by more than one score, a 20-10 victory over the New Orleans Saints in Week 10. Over the last two years, Pittsburgh hasn’t won a single game by more than 12 points.