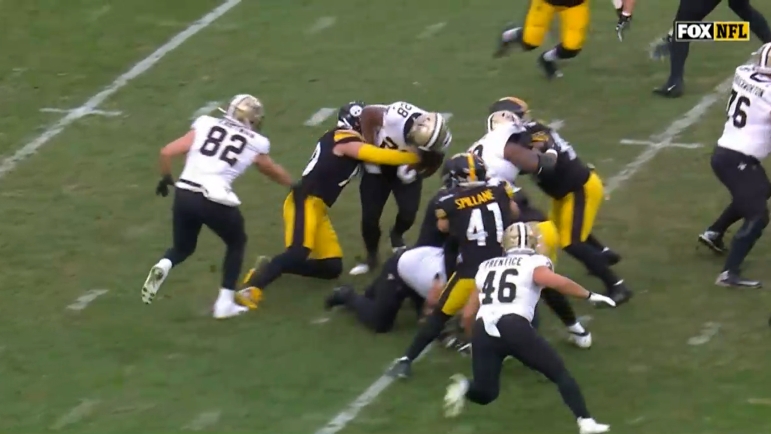 After finishing last in the league in run defense in 2021, the Pittsburgh Steelers are a top-ten unit as they enter their Week 13 matchup with the Atlanta Falcons. Despite playing at a high level, outside linebacker T.J. Watt believes the run defense can be better and help lead to splash plays. Talking to the media earlier today, Watt talked about the need for the run defense to execute.

“We can always do better. We’re always trying to pride ourselves on stopping the run, and we know that when you stop the run and our offense continues to put up points, it’s gonna allow us to pin our ears back and play the football that we wanna play and create the splash. So something that we’re trying to improve every week,” Watt said via a video posted to Steelers.com.

Obviously, if Pittsburgh is able to stop runs on early downs and put teams in position to throw, it’ll benefit the pass rush and allow guys like Watt, outside linebacker Alex Highsmith, and defensive linemen Cameron Heyward and Larry Ogunjobi focus on getting to the quarterback in second or third and long situations. Pittsburgh’s pass rush hasn’t been as good as expected this year, and a lot of that can be attributed to Watt’s seven-game absence with a torn pectoral. But it’s still a unit that’s highly capable of effectively rushing the passer and has guys that have shown this year and in the past that it’s something they can excel at. Pittsburgh’s ability to rush the passer can also help lead to bad throws, and the defensive backs can be ready to pounce and pick a ball off. A good pass rush tends to help create splash plays, but the pass rush opportunities won’t be as frequent if the Steelers can’t consistently stop the run.

Sunday will be one of the biggest tests so far for the Steelers’ run defense. The Falcons have a very run-heavy offense. They rank 2nd in the NFL behind the Chicago Bears in total rush yards at 1,920 and have a quarterback in Marcus Mariota who’s known for his running prowess, as well as Cordarelle Patterson and Tyler Allgeier in the backfield. Both Patterson and Allgeier have over 500 rushing yards this season, while Mariota isn’t too far behind at 421. Caleb Huntley also has 347 yards on the ground on 71 attempts, giving Atlanta four guys with over 70 rushing attempts this season.

Pittsburgh is going to have to lock in and really focus on stopping the run this week. If they have a game like they did in Week 3 against the Cleveland Browns when Nick Chubb ran all over Pittsburgh’s defense en route to 113 yards, while Kareem Hunt added another 47. For Pittsburgh to win, the run defense is going to have to step up to the plate the way they have the majority of the season.