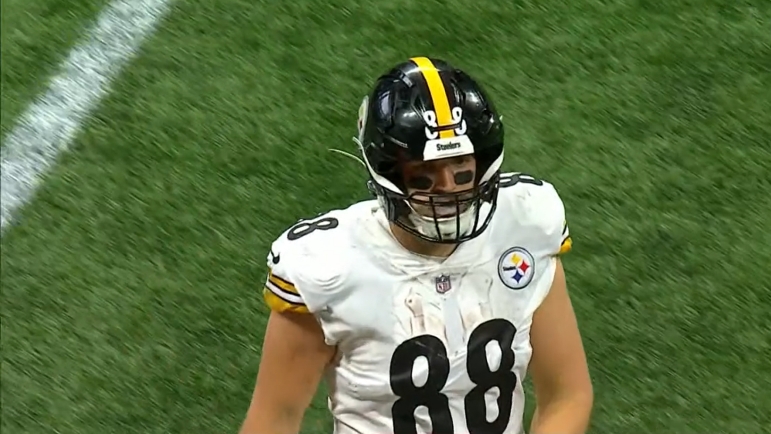 As we’ve done in the past, the keys to the Pittsburgh Steelers winning (or losing) today’s game. Three things that need to happen for them to end up on the right side of the score and vice versa in tonight’s game against the Las Vegas Raiders.

1. Maxx Crosby Has A Silent Night

Chukwuma Okorafor hopes to ring in the holidays without getting his quarterback hit in this bitter cold. Crosby is the Raiders’ top defensive threat and makes up nearly half of the Raiders’ total sacks. Pittsburgh figures to offer Okorafor a whole lot of help but he’ll still have to win 1v1. Okorafor’s struggled a bit since the bye and allowed the lone sack allowed last week to Brian Burns. His punch needs to be better and he’ll have to be ready for Crosby’s array of moves.

In part due to injury, in part due to gameplan, Freiermuth was held without a catch for the first time of his career. Don’t expect that to happen again. The Raiders don’t have great coverage linebackers and in a game that should feature short and quick passes given Crosby’s pass rush and the extreme weather conditions. Freiermuth should be a focal point of QB Kenny Pickett, returning from his concussion, and soak up at least five receptions.

The Raiders can run the ball as well as about any team. And the key to defending those teams is getting in the backfield, especially on first down. The Raiders have some question marks with the health of their interior offensive line so Pittsburgh’s beef in the middle, Cam Heyward and Larry Ogunjobi most notably, must do their job just like they did last weekend against the Panthers.

1. Hunter Renfrow Wins On Third Down

Davante Adams rightfully receives all the attention and TE Darren Waller is a gamebreaker but Renfrow is a guy who also worries me. A crafty receiver in the slot, they use him on a ton of option routes and allow him to attack leverage and create space. The Steelers could bump Cam Sutton inside to cover him in sub-packages but that could leave a younger and more mistake-prone James Pierre on the outside against Adams. Fine line to walk.

2. Raiders Special Teams Wins The Day (And The Game)

Special teams almost always play a role in bad-weather games. And it probably will again. Which side comes out on top? The Raiders have strong specialists in kicker Daniel Carlson and punter A.J. Cole. Chris Boswell is one of the league’s best but this will be a test for Pressley Harvin and the Steelers’ coverage units, who likely will be doing some covering this game when forced to kick into the wind. Whichever unit makes the big play – or the big mistake – could decide this one.

3. Pittsburgh Tries To Push The Ball

Given the weather, the Raiders’ pass rush with Crosby, and Kenny Pickett’s lack of a booming arm, trying to fire it deep is tricky. This might not be the ideal game for George Pickens but if Pittsburgh tries to push it deep, they may run into problems. The Raiders’ secondary isn’t great but the wind could knock down or move a ball and turnovers will be killers, as they’ve been all year long.