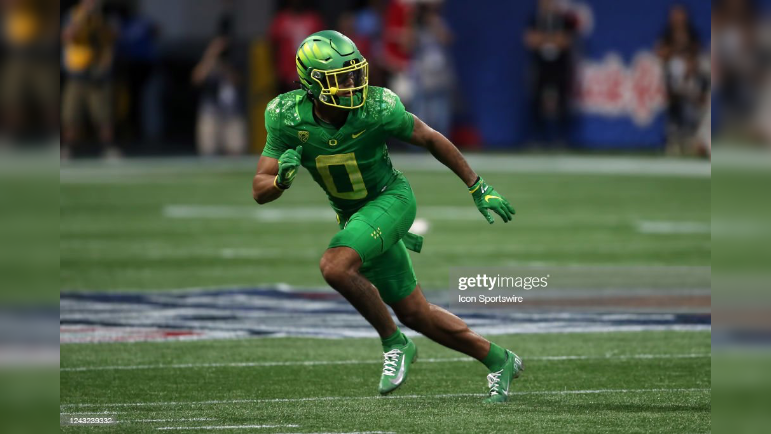 Based on the way the roster could shake out following an up-and-down 2022 season for the Pittsburgh Steelers, the cornerback position will most likely be a significant need for the black and gold.

Cameron Sutton is set to hit free agency, and the investment in Ahkello Witherspoon hasn’t had much of an positive return this season as he’s been injured much of the year and wasn’t very good overall when on the field.

Levi Wallace was also signed in free agency alongside Witherspoon, and while he’s been productive overall, the Steelers need for a legitimate shutdown cornerback is high, especially in the AFC North when dealing with Ja’Marr Chase and Tee Higgins twice a year in Cincinnati, and Amari Cooper in Cleveland.

CBS Sports’ Josh Edwards seems to believe cornerback is a top need for the black and gold in the 2023 NFL Draft, pairing the Steelers with Oregon Ducks star cornerback Christian Gonzalez at No. 16 overall in his latest mock draft.

“Gonzalez, a Colorado transfer, is a big-time athlete who is still growing into the position,” Edwards writes regarding the Steelers’ selection of Gonzalez in the mock draft exercise. “He has the size, strength and speed to line up against NFL wide receivers; he just needs to improve in run support.”

To play cornerback for the Steelers, you have to be willing to defend the run, playing with some physicality downhill off the edge. Historically, it’s been a requirement for the back and gold, but the new regime might see it a bit differently, especially after investing in Witherspoon via trade last season before then singing him to a two-year deal in free agency.

Witherspoon was known as a good coverage corner but wasn’t very physical coming downhill against the run. That changed once he was in Pittsburgh as he found out what was needed to play the position in the Steel City.

That could be the case for Gonzalez, who has the size, speed and overall length to profile as a potential shutdown cornerback in the NFL.

His tape vs London last year was so up/down. I can't wait to see him play vs UGA! pic.twitter.com/nB2R3ZTeqM

A Colorado transfer, Gonzalez was a star at Oregon this season, finishing with 50 tackles, four interceptions, seven passes defensed and one tackle for loss on the season for the Ducks. Prior to the season, Gonzalez was named to The Athletic’s Bruce Feldman’s “Freaks List” for his athleticism.

According to PFF, Gonzalez — a redshirt sophomore — allowed a 74.7 passer rating, which ranks 140th in college football among corners with at least 100 snaps. Gonzalez was targeted 64 times in 2022, the most in his team. He allowed 39 catches for 495 yards as a member of the Ducks.

Oregon CB Christian Gonzalez put on a clinic in coverage vs UCLA. His patience, footwork, hip fluidity, and technique are outstanding.

He is not talked about enough but Gonzalez is a talented cover corner! 📈pic.twitter.com/dby3o1QAjl

Following his strong 2022 season with the Ducks, Gonzalez was named Second Team All-Pac 12.