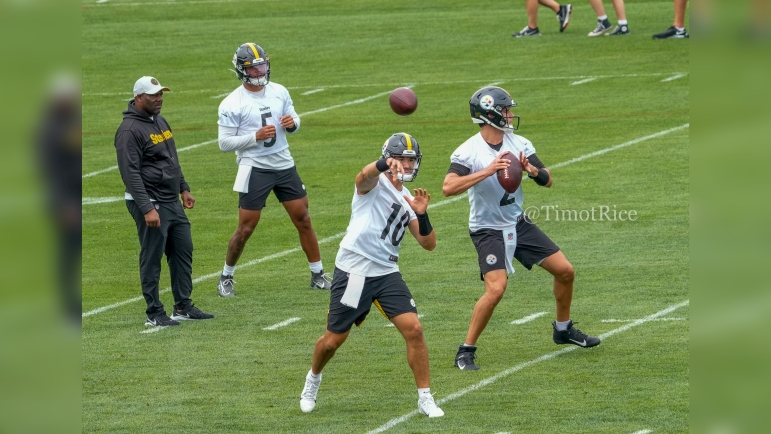 No one wants to turn to their second (or third) string quarterback. But most teams don’t have the experience Pittsburgh offers top to bottom. If Kenny Pickett can’t play this weekend, the Steelers will have two experienced options behind them. As he does every Thursday, offensive coordinator Matt Canada spoke to the media and was confident in whatever option the Steelers turn to if Door #1 is closed.

“I think we’re fortunate to have a really deep quarterback room, I’ll say that,” Canada said via a team transcript. “We’ve got guys that have all started. Mason [Rudolph] started games. Obviously, Mitch [Trubisky] has started a lot of football games, started games this year. Mason started games here for us in the past. You never want to be in this situation, but I think we’re in as good a spot as we could be with where we’re at. You just have to proceed forward and get ready to play.”

Trubisky is a former first round pick who started 50 games in Chicago before his time with the Bears ended. And of course, he ran as the Steelers’ starter all offseason and for the first month of 2022 before being benched for Pickett. Rudolph has made ten career starts and is the longest-tenured passer in the Steelers’ system, drafted by Pittsburgh in 2018. Guys who have come off the bench, guys who have worked week-to-week as the starter, guys who have been in about every situation a quarterback can be in.

Mike Tomlin might not be one to seek comfort but having an experienced and known option behind your starter is a good thing. Compare that to the Baltimore Ravens, who turned to the less-experienced Tyler Huntley and then third-stringer Anthony Brown, a rookie making his first NFL appearance, last weekend. Of course, the Ravens came out on top thanks to their run game but there was less certainty with those guys than what the Steelers have.

As of this writing, it’s unknown who the Steelers will start this weekend. It could be any one of Pickett, Trubisky, or Rudolph. Pickett practiced on a limited basis Wednesday but he’ll probably have to work in full today and tomorrow to have the reps to play.

If he can’t go, it’s a coin flip between Rudolph and Trubisky but the slight edge might be pointing to Rudolph. Whoever is under center this Sunday, they’ll need to secure victory in order to avoid Mike Tomlin’s first losing season. For another week, anyway.