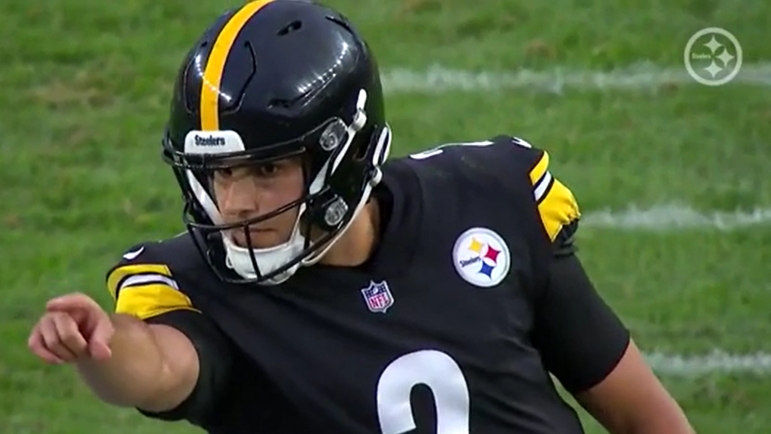 Maybe Kenny Pickett plays this week and all of this is moot. Pickett worked in a limited fashion Wednesday, certainly making it plausible he gives it a go this Sunday against the Carolina Panthers. But if he doesn’t, the Steelers have a decision to make. Mitch Trubisky or Mason Rudolph. It appears to be an open competition, a battle that could go either way.

If that’s truly the case and this isn’t Training Camp 2.0 where a competition existed in name only, the Steelers already have their answer. It’s Mason Rudolph’s time to…shine?

It’s not like Rudolph has done anything differently over the last week. He is who he is and Mike Tomlin’s even admitted that. The only thing that’s changed is Trubisky and his costly three-interception performance against the Baltimore Ravens.

The fact there’s a competition when Trubisky has comfortably run ahead of Rudolph all season speaks volumes. Usually, it’s next man up. Pickett goes down, Trubisky steps in, a simple equation. Instead, Tomlin, who has been very clear about his QB pecking order all season, is wavering. Leaving up in the air, taking it day by day. That says nothing good about their confidence in Trubisky.

And it’s understandable. Yes, Trubisky moved the Steelers’ offense Sunday. He made plays, there’s no arguing that. But he also moved them off the field with crushing interceptions. Perhaps the first one isn’t his fault, context is important as it was for Pickett early in the year, but the second two are entirely on him.

It’s an obvious point but it’s truest for these Pittsburgh Steelers. They can’t turn the ball over. 5-1 when they don’t, 0-7 when they do. Doesn’t get any easier to understand than that. Trubisky wants to push the ball, it’s in his nature, but his downfield accuracy is spotty and he’s prone to getting tunnel vision and making ugly mistakes. For Trubisky, when it’s good, it’s pretty good. When it’s bad, it’s really bad. That was true of him in Chicago, in training camp with the Steelers, his first four weeks starting, and Sunday’s loss to Baltimore.

Take care of the ball. It’s the #1 goal for any quarterback and it’s the only thing that matters in Pittsburgh this season. When Pickett did a better job of that since the bye, being more conservative, throwing the ball away more often, the Steelers won. 3-1 during the bye as Pittsburgh went a team-record four straight games without a giveaway. Three turnovers against the Ravens and well, you know the rest. If Trubisky can’t do that, he can’t be the guy. That seems to be the Steelers’ calculation.

Rudolph is no great quarterback, he’s a career backup, but he’s more accurate and plays within structure. To the letter, he’ll do exactly what coaches say. Doesn’t mean he’s incapable of pushing the ball and Rudolph actually throws a pretty and accurate deep ball but he offers better odds of taking care of it, too.

It’s hard to put the toothpaste back in the tube. If there’s suddenly a battle between #2 and #3 in the middle of a season, it sorta says it all. Pittsburgh didn’t have to frame this as a competition. They are. Maybe they’re just playing more games but after dangling the starting QB carrot in front of Rudolph all offseason, fully knowing it wasn’t going to happen, doing it one more time just feels wrong. If Pickett is healthy and ready, he’ll start Sunday. If not, don’t be surprised to see Rudolph get one last shot.