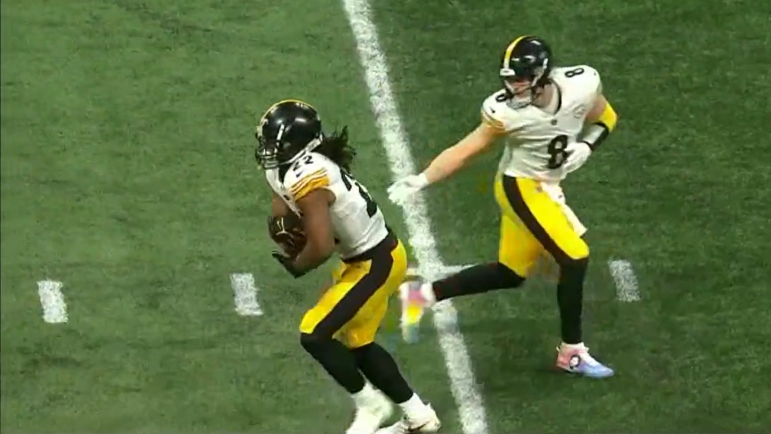 On the road of the second straight week, the Pittsburgh Steelers did a lot of things right on both sides of the football in a hard-fought 19-16 win over the Atlanta Falcons inside Mercedes-Benz Stadium, improving to 5-7 on the season, thanks to a two-game winning streak.

Once again, the Steelers’ offense had great balance with a powerful rushing attack and a consistent passing attack overall, which led to a ball-control style offense, beating the Falcons at their own game inside their own stadium.

Thanks to the performance on the road in yet another win, the Steelers earned high marks from CBS Sports Monday morning, earning a “B” grade from CBS Sports’ John Breech.

“The Steelers didn’t do anything flashy against the Falcons, they just beat them the old-fashioned way with a well-rounded performance in all three phases of the game. The Steelers ground attack was firing on all cylinders led by Najee Harris (17 carries for 87 yards), which opened things up for Kenny Pickett,” Breech writes regarding the Steelers’ grade for the Week 13 performance. “Although Pickett struggled some, he did throw the game’s only TD pass to Connor Heyward in the second quarter. The Steelers’ offense was so dominant in the first half that Pittsburgh didn’t punt a single time. Kicker Matthew Wright also came up with four clutch field goals from (46, 46, 48 and 38).

“The Steelers might not make the playoffs, but they did take one step closer to helping Mike Tomlin finish with a winning record for the 16th straight season.”

Najee Harris ran *angry* against the Falcons. Created so much after contact.

Looks healthy, running totally different since the bye. This is the guy the Steelers drafted and saw last season. Excellent performance. #Steelers pic.twitter.com/NTINSMYW33

Don’t look now, but the Steelers are playing pretty well under head coach Mike Tomlin, playing the style of football he and many within the organization envisioned they would play this season and win a bunch of games: run the football at a sound clip, make enough plays through the air to remain balanced offensively, play fast, physical football and avoid mistakes on special teams.

In the last two weeks, that’s been the recipe for success for the Steelers, who beat the Indianapolis Colts 24-17 in Week 12 on the road on Monday Night Football before turning around on a short week and beating a physical Falcons team on the road.

It’s not going to be pretty, let alone flashy, but the way the Steelers are playing since the bye week is very clearly a recipe for success. Granted, some of the success can be attributed to the level of competition the Steelers have faced since the Week 9 bye week, but the Steelers are doing what is necessary to win games down the stretch, pushing towards a winning season for Tomlin once again.

With Najee Harris back in good form once again and an offensive line playing rather well overall in the run game and in pass protection, the Steelers could find themselves pushing further and further into the playoff picture down the stretch. In the process, the Steelers are learning how to win close games, which will be rather important moving forward for the black and gold beyond this season.