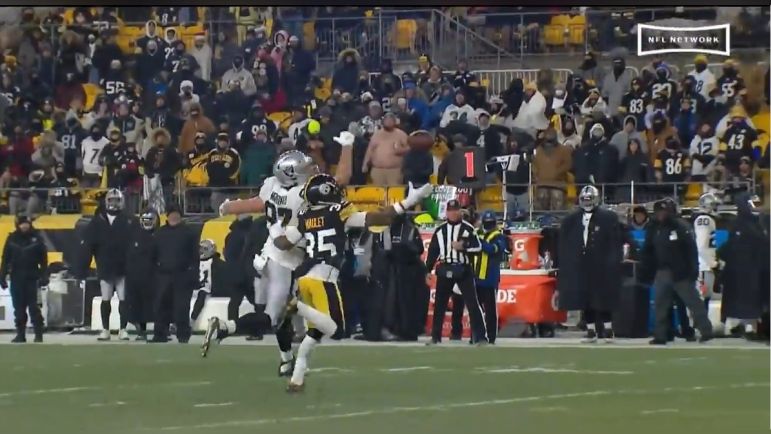 I had to do a double-take when I saw the stat. The Pittsburgh Steelers defense leads the entire NFL in interceptions. Despite a lack of pressure throughout the year, no unit has more picks than Pittsburgh’s 17, with three more added in Saturday night’s win over the Las Vegas Raiders.

With two games left to play, here’s the top-five leaderboard.

Not even in the Steelers’ dominant 2019 season did they pace the league, finishing second that year with 20 interceptions, trailing the New England Patriots’ whopping 25. They did tie for the league lead in 2020, 18 interceptions that equaled three other teams, but they didn’t hold the top spot all by themselves.

In fact, the last time Pittsburgh ended a year with the outright lead in interceptions was all the way back in 1977, finishing the year with 31. 2008 didn’t do it, 2005 didn’t do it, and none of the great groups in the 90s did it. In ’77, CB Mel Blount led the Steelers with six, a modest season by his standards, while DB Jimmy Allen had five and Jack Ham, one of the best coverage linebackers ever, picked off four. Tony Dungy intercepted three, ditto with Glen Edwards and Donnie Shell while even defensive lineman Dwight White picked a pair.

This year, Minkah Fitzpatrick leads the Steelers with five interceptions, tying his single-season high. He got off to a hot start with two picks in his first two games and three over his first four before going on a five-game drought. But he called game against Atlanta and had one of three INTs in Saturday’s win over Las Vegas. League-wide, only the Eagles’ C.J. Gardner-Johnson and the Seahawks’ Tariq Woolen have more interceptions than Fitzpatrick’s five.

But to be the league leader, it has to come from more than one guy. Levi Wallace has a career-high three this year, playing much better ball since the bye. Cam Sutton’s made three incredible plays on the ball last week for his trio of picks while T.J. Watt’s intercepted a pair. Four other members of the secondary each have one, too – Arthur Maulet, James Pierre, Damontae Kazee, and Ahkello Witherspoon.

The more takeaways, the better, that’s a given, though it’s funny to see the interception leaders this year not be among the best teams in football. The Steelers have slim hopes for the playoffs while the Patriots’ odds aren’t tremendously stronger. The Eagles and 49ers are strong contenders while the teams tied for fifth – the Packers, Broncos, Cowboys, Bills, Rams, and Ravens – run the gamut from Super Bowl favorites to terrible teams. Much of that has to do with quarterback play, it still trumps everything else, even when you have a defense gobbling up the football.

Still, the Steelers’ defense has consistently taken the ball away even without top-flight secondary talent outside of Fitzpatrick. It’s part of the mindset created by then DBs coach and now DC Teryl Austin, who has always focused on that element and practiced as such, running through turnover circuits every day of practice, getting DBs on the JUGs machine before and after practice, and having DBs catch passes to finish nearly every single drill. Since Austin was hired in 2019, the Steelers rank second in the NFL with 68 interceptions, only trailing the Patriots, and have a healthy lead over third place. Of course, adding players like Fitzpatrick certainly helps boost interception numbers, but Austin has brought a mentality that’s carried onto the field. And after the next two games, that could make a bit of modern Steelers’ history.