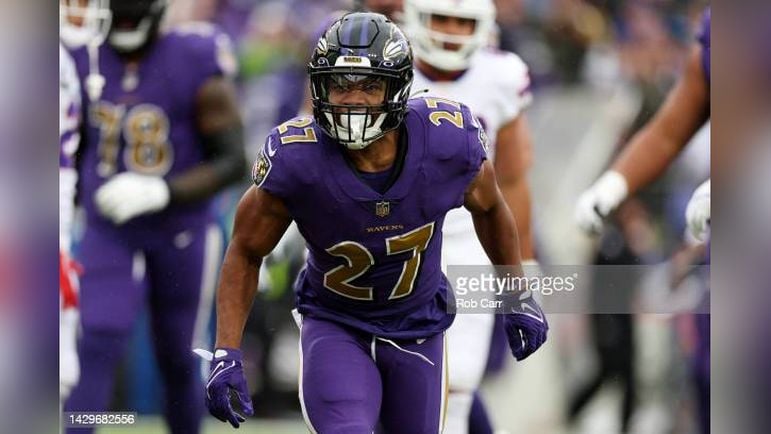 As we’ve been doing for several years now, we’ll break down the Pittsburgh Steelers’ opponent each week, telling you what to expect from a scheme and individual standpoint. Like last year, Josh Carney and I will cover the opposing team’s defense. I will focus on the scheme, Josh on the players.

Same Ravens’ run game. Even without Lamar Jackson, the Ravens’ run game hasn’t changed much. Expected starting QB Tyler Huntley isn’t the run-threat Jackson is but is still mobile and demands attention in the run game. The Ravens are among the most run-heavy teams in football with 471 attempts this year, the sixth-most in football while their 5.3 yards per carry is tied for the best mark in the league this year. However, they have just 13 rushing scores, a lower mark than expected.

I normally focus these on seasonal stats but with the Steelers/Ravens playing each other so recently and the lack of Lamar Jackson, I’m focusing many of my stats on Weeks 13 through 16, when Jackson got hurt until now. Over that span, the Ravens lead the NFL with 20 runs of 10+ yards.

Schematically, the offense is the same as before. Downhill/pistol run game with a lot of power. Power to the field with the back following behind multiple pullers. A cut-up from their win over the Falcons.

And watch out for QB power/designed runs on the goal line. They used it to beat the Denver Broncos when Jackson first got hurt and again against the Falcons in Week 16. That’s when you really have to watch for Huntley’s legs.

A heavy personnel team that loves using FB Patrick Ricard who lines up in the backfield or on the line in both two and three-point stances. He was a real weapon in the team’s Week 14 win over Pittsburgh.

Some other offensive stats. On the year, the Ravens are averaging 21.4 PPG, 15th in the league. But since Jackson has been hurt, Week 13 until now, they’re down to just 11.5 PPG, last in the league. With Jackson, Weeks 1-12, they sat at 25 PPG. So it’s a huge difference. With Huntley playing/starting, they haven’t scored more than 18 points.

One thing they’re still doing well is taking care of the ball. Huntley’s thrown only two interceptions and on the year, the Ravens’ 16 giveaways are tied for the third-fewest in football. Their +8 turnover differential is also tied third best across the NFL.

Huntley has completed a high percentage of passes with a quick and short passing game, 67%. Lamar Jackson has the third-longest snap-to-throw time in football at three seconds. Huntley’s is considerably quicker. His YPA is also another indication at just 5.8, tied 45th among all QBs with 50+ attempts. He’s thrown just one touchdown this season to two picks. Baltimore’s done their best to limit his exposure and in their last two wins, he hasn’t thrown the ball more than 17 times.

From Weeks 13-16, while the Ravens lead the league in 10+ rushes, they’re 30th in 20+ yard completions with just five. Looking at how the offense has looked with Huntley in there, WR Demarcus Robinson has emerged as Huntley’s favorite target with 19 receptions for 128 yards (6.7 per reception) and one score. TE Mark Andrews is second with 12 receptions and more downfield options, averaging 12.2 yards per catch.

Conceptually, I’m not seeing many changes from our last report. Quick spacing concepts and bending routes, especially in the red zone, to get Mark Andrews involved. Here are two examples including the latter that got Andrews wide-open on what should’ve been a touchdown.

And they’ll isolate him backside 3×1 for some 1v1 opportunities too.

Near the goal line, watch for slant/flat combinations and pick plays. Two examples from last week’s game, including a touchdown on this slant/corner concept. Better to play zone down here than get rubbed or out-leveraged.

Just three weeks after falling to the Baltimore Ravens at Acrisure Stadium, 16-14, in Week 14, the Pittsburgh Steelers hit the road for a Sunday Night Football matchup against the AFC North rival Ravens in Week 17.

Just a few weeks removed from matching up against the Ravens, not much has changed offensively for Baltimore.

With Lamar Jackson continuing to miss practice, backup quarterback Tyler Huntley will be the starting quarterback on Sunday Night Football against the Steelers. While he’s no Lamar, Huntley still brings that mobility factor that the Ravens have built their offense around.

Huntley has struggled to throw the football consistently this year when on the field, which is a bit of a concern for the Ravens. Without a consistent passing game, a lot of the pressure falls on the run game.

Fortunately for Baltimore, the run game has been very good in recent weeks, including the recent matchup with the Steelers.

Though Huntley has struggled throwing the football, he can still make plays on the move in the passing game.

That’s recent free agent signee Sammy Watkins doing a great job on the scramble drill to work himself open for the deep shot. Those types of plays are there for the Ravens and have been since offensive coordinator Greg Roman landed in the role a few years ago.

The Ravens just don’t pull the trigger often enough on plays like this.

The key with Huntley as a passer is having him in rhythm. Too often, the Baltimore passing attack lacks rhythm and spacing. They seem to have found some in Weeks 15 and 16 against the Falcons, especially with tight end Mark Andrews.

Make no mistake about it: Andrews is their top offensive weapon, a legitimate receiving threat lined up anywhere on the field.

The Steelers did a nice job of covering him in the Week 14 matchup, so they’ll need to focus on him again.

Outside of Andrews in the passing game, the addition of Watkins paid off right away against the Falcons as the former first-round pick showed off his ability to make plays deep on the second drive of the game.

He’s not to be counted on too much though, based on his career overall. He’s a big-name vet in the same way DeSean Jackson is. They can both get deep, but the quarterback isn’t there right now to get them the football deep.

Devin Duvernay missed Week 16 but should be back in Week 17 against the Steelers. He’s another speed threat, one the Ravens try and get the football a number of ways. Demarcus Robinson is the other name to know at the position.

Huntley seems to trust him quite a bit. He’s a solid possession receiver overall.

Behind Andrews at tight end, Josh Oliver and Isaiah Likely have gotten a lot of run in recent weeks in the passing game. Likely is a good move tight end overall that is a mismatch, while Oliver is starting to find his game overall as a field stretcher at the position.

The offense runs through the running game though, no pun intended.

With the return of J.K. Dobbins into the lineup, the Ravens now have the ideal combination in the backfield in Dobbins and Gus Edwards. With a powerful offensive line up front, the Ravens can absolutely maul teams.

Dobbins is very clearly the lightning in the Ravens’ backfield. Though he doesn’t quite have his game-breaking speed back just yet, he has still ripped off a handful of explosive plays in his return from the knee injury last season that lingered throughout the summer and required another surgery.

Edwards is an absolute load in the run game. He will rip off some explosive runs from time to time, but he’s the hammer between the tackles. He absolutely wears down defenses when on the field.

The run game is extremely successful due to the offensive line overall. Though they don’t have huge names up front, they execute at a high level and consistently get a great push off the line.

Here’s how I expect them to line up left to right:

Zeitler missed the first matchup but should be back for the Week 17 battle. He’s still a high-level guard overall and will be a massive boost to Baltimore’s offensive line.

Linderbaum dominated in the Week 14 matchup and showed just what the Steelers are missing at center, while Powers and Stanley helped put the game away with powerful running late.

On special teams, the Ravens have shown some cracks in the armor the last two weeks. Future Hall of Fame kicker Justin Tucker has had a field goal blocked in back-to-back weeks, so the Steelers could look to exploit that again this week.

There is no doubt though that Tucker is elite.

The return of Duvernay in the return game will be a big boost. James Proche and Justice Hill filled in well against the Falcons, but Duvernay is an All-Pro caliber return specialist and remains incredibly dangerous any time he touches the football.