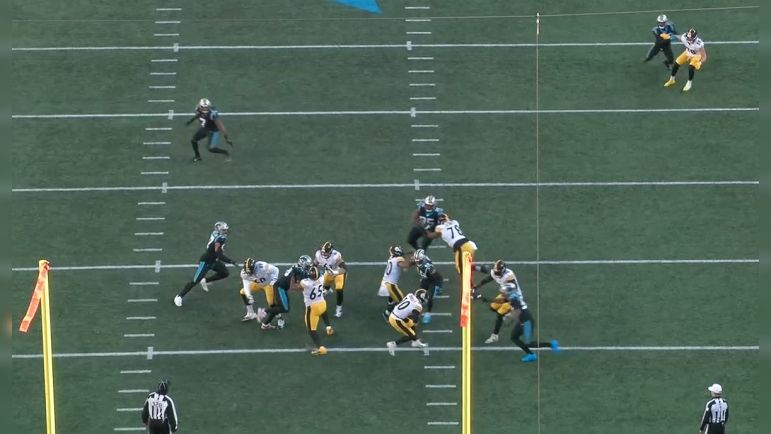 Breaking down the lone sack the Pittsburgh Steelers allowed in their Week 15 win over the Carolina Panthers.

“Mug” look here from the Panthers. The good news is the Steelers did a better job of keeping their back in against these looks instead of risking unblocked ends free. I don’t know if that was situational, since this was third and fairly long, or the team correcting the issues they’ve had the past few weeks against sim pressure. So RB Jaylen Warren stays in.

Here, the line slides left and the LB pops out with the other A gap LB blitzing, likely by design (blitz the LB opposite the center slide). Warren has him picked up and makes forceful contact. But he has trouble anchoring and sustaining while RT Chukwuma Okorafor gets long-armed and by LDE Brian Burns, one of the league’s better pass rushers who is easily able to corner.

With Warren getting walked back to collapse the pocket and Burns winning the edge, there isn’t anywhere for QB Mitch Trubisky to go. With no one open downfield, the Panthers have solid man coverage, he goes down and the Steelers punt. 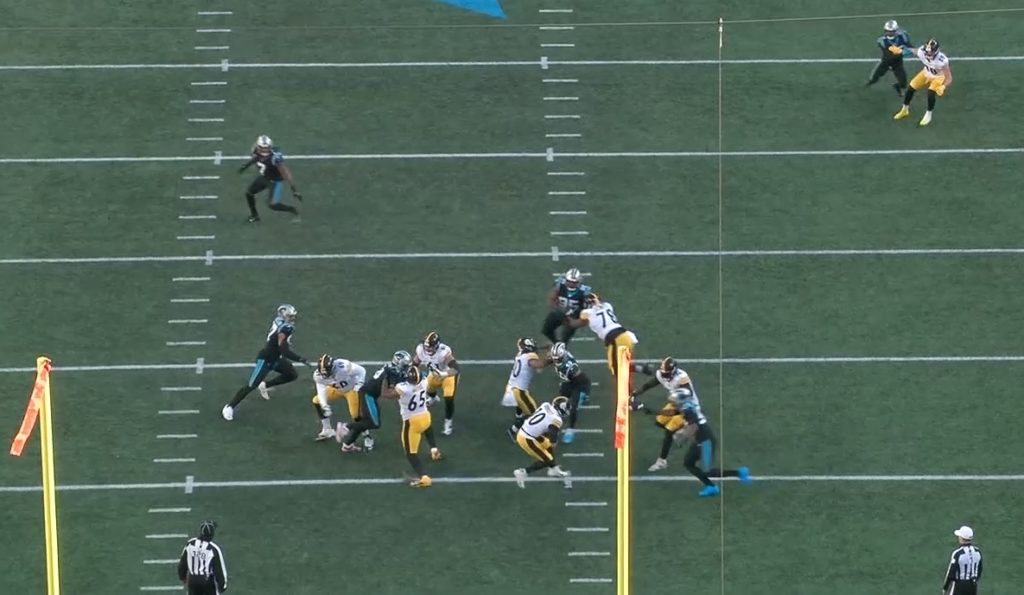 Here, there are issues with the width and the depth of the pocket, the two essential components that make it up. Warren couldn’t secure the depth, Okorafor couldn’t secure the width, and that’s a recipe to be sacked. So the blame is assigned to both. The good news is this was the only sack Pittsburgh allowed and they haven’t had as many issues in recent weeks. While a stronger and more committed run game has helped limit their exposure, the line has blocked better and kept the pocket pretty clean in this game. Just not here.

Okorafor will have to be better this Saturday though. Prior to the bye, he allowed just 1.5 sacks. Since the bye, he’s allowed 2.5. He’ll have a tough challenge this weekend against Maxx Crosby, one of the league’s premier pass rushers.

Blame: Half on RB Jaylen Warren, half on OT Chukwuma Okorafor