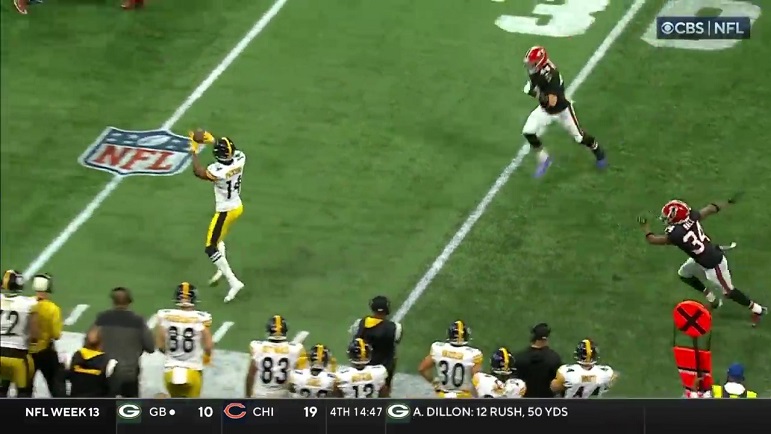 George Pickens wasn’t a happy camper in Sunday’s win over the Atlanta Falcons, finishing with a lone catch for two yards. In the most recent edition of Ben Roethlisberger’s Footbahlin podcast, Roethlisberger said that lone grab was by design, an attempt to placate a clearly upset Pickens.

Here’s what Roethlisberger had to say about the moment.

“He’s sitting there pouting,” Roethlisberger told the show that featured guest James Harrison. “And they showed the coach come up and sit next to him and they showed Cam come up next to him and get down and talk to him…you could tell he’s mad. He’s not getting the ball. As soon as the Steelers get the ball back, it’s 1st and 10. They throw a three-yard completion to him. And that it is prototypical offensive coordinator trying to keep a guy happy.”

As Roethlisberger said, Cam Heyward came up to Pickens on the bench, telling him something likely along the lines of keeping your head up and not getting too mad at the situation.

Here’s a look at the play. On 1st and 10 late in the third quarter, the Steelers ran one of their patented sprintouts, though it’s become a play used far less frequently since the first quarter of the season. Pickens made the grab for a two-yard gain, still putting the Steelers in second and long.

Roethlisberger said the offense would do the same when he was quarterbacking the team.

“We would do that. ‘Hey, so and so is mad….we gotta throw a screen.’ Do anything to get him the ball. They threw him that ball to try and make him feel better.”

While Roethlisberger didn’t name names, you can bet he was at least thinking about Antonio Brown, who would famously get upset when the ball didn’t go away. If he wasn’t catching passes, the Gatorade cooler was on high alert. But Roethlisberger had a long career and almost all the great receivers are wired the same way. Wanting the ball, trying to compete, and looking to make plays. That’s how those guys are paid.

Ultimately, the gimmie throw didn’t seem to satisfy Pickens who was visibly upset throughout the game. While frustration is normal and commonplace, Roethlisberger references as much, Pickens will have to control that frustration and not get so down at the first sign of trouble. He held his head low after two drops in Monday’s win over the Colts and clearly struggled through Sunday’s win over the Falcons. A vertical receiver in a now-conservative, run-heavy offense that’s just trying to not turn the ball over, Pickens will have a fair share of “dud” type games. He’ll have to adjust that mindset going forward but hopefully in Sunday’s game against the Baltimore Ravens, Pickens is seeing more than just the layup throw.