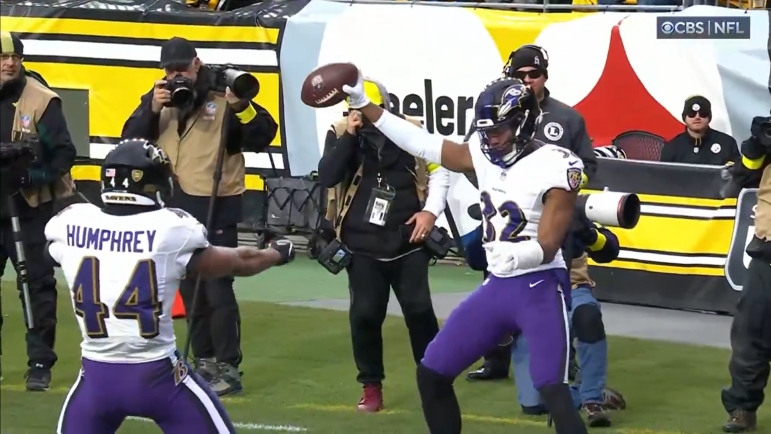 The Pittsburgh Steelers returned to Acrisure Stadium looking for their third straight win, taking on the Baltimore Ravens in an AFC North matchup. Despite the Ravens having to play third-string quarterback Anthony Brown for much of the 2nd half, the Steelers couldn’t contain the Baltimore rushing attack and Mitch Trubisky threw three interceptions in relief of an injured Kenny Pickett as the Steelers lost 16-14.

Pittsburgh won the toss and deferred, but the Ravens went three-and-out on their opening possession. The Steelers’ drive started at their 23-yard line after a punt by rookie P Jordan Stout. On 2nd and 7, QB Kenny Pickett scrambled for 14 yards and a first down, but it would be the Steelers’ only first down on the drive as Pickett got sacked on 3rd and 4 later in the drive and Pittsburgh had to punt.

The Steelers got the Ravens into a 4th and 1 situation at their own 34, but QB Tyler Huntley converted on a QB sneak. Later in the drive, Huntley hit WR Demarcus Robinson for a 23-yard gain down to the Pittsburgh 28. The Ravens wouldn’t pick up another first down, but K Justin Tucker nailed a 42-yard field goal to put Baltimore up 3-0 with 4:46 left in the first quarter.

The Steelers responded with a three-and-out, and P Pressley Harvin III unleashed an ugly 17-yard punt that gave the Ravens great field position at the Pittsburgh 48. On the first play of the drive, RB J.K. Dobbins ran for 44 yards and a first down to the Pittsburgh 4. On the next play, Dobbins punched it in and Tucker’s extra point made it 10-0 Ravens with 2:31 left in the first quarter.

Kenny Pickett didn’t come out for the Steelers’ next series due to injury, and backup QB Mitch Trubisky led the Steelers on a scoring drive. On 3rd and 9, Trubisky found TE Pat Freiermuth open for 14 yards and a first down, and the next play he took a shot to WR George Pickens, and Pickens gained 42 yards and was brought down at the Baltimore 7. Two plays later, Pittsburgh cut the lead to 10-7 on a one-yard touchdown run by RB Najee Harris.

The Ravens’ rushing attack got the best of Pittsburgh again, as RB Gus Edwards ran for nine yards and 16 yards on consecutive plays. On 1st and 10 from the Pittsburgh 43 later in the drive, Huntley got sacked by DL Chris Wormley, getting revenge on his former team. On the next play, Huntley scrambled for an 11-yard gain, setting up 3rd and 5. On 3rd down, Huntley scrambled for another four yards, and the Ravens kept the offense on the field. This time, Huntley fumbled on the handoff to WR Devin Durvernay on a jet, and the Steelers were able to turn the Ravens over on downs.

On 3rd and 7, Huntley evaded the pressure and found a wide-open WR Desean Jackson for a gain of 25 yards and a first down. A first down run by Edwards later in the drive to the Pittsburgh 20 was the last play before the two-minute warning, but Baltimore couldn’t find the end zone. With 1:03 left, Tucker put Baltimore up 13-7 with a 35-yard field goal.

The Steelers’ offense quickly got to work, gaining 11 yards on first down on a completion to WR Diontae Johnson and then Trubisky hit Pickens for 25 yards and a first down on the left sidelines. A seven-yard reception by WR Gunner Olszewski put the Steelers in field goal range, and Freiermuth brought Pittsburgh to the Baltimore 23 on a completion from Trubisky. But the Steelers turned the ball over again when Trubisky was picked off by LB Patrick Queen. It was the second interception by Trubisky in the red zone. Baltimore went into the half leading 13-7.

The Steelers opened the second half with the ball. On 3rd and 4, Trubisky found Johnson open for 14 yards and a first down. That would be the only first down of the drive for the Steelers, as Pressley Harvin had to punt after the Steelers were short of the sticks on third down. Harvin’s punt was a touchback, so Baltimore would look to make it a two-score game with 10:49 left in the third quarter.

The Ravens would move the ball to the Pittsburgh 46 after gaining two first downs, but they had to punt after Huntley was stopped short trying to run for the first down on 3rd down. Stout’s punt was fair caught by Steven Sims at the Pittsburgh 11.

On 2nd and 9, Trubisky and Sims connected for an 11-yard gain. The next play, Trubisky escaped a sack and floated a pass to Harris for a first down, and then went back to Sims for another 11-yard gain and first down to the Pittsburgh 44. After getting into Baltimore territory at their 46 on an 11-yard completion to Johnson, Trubisky threw a heave to the end zone that was intercepted by S Marcus Williams. It was Trubisky’s third interception of the day.

Baltimore would have the ball at their own one with Anthony Brown, an undrafted rookie under center following an injury to Huntley. The Ravens escaped danger on a 2nd down run by J.K. Dobbins for 11 yards and a first down. On the next play, RB Kenyan Drake fumbled but Baltimore was able to fall back on the ball and retain possession. Two plays later, OLB T.J. Watt was able to get to Brown and sack him, and the Ravens had to punt from their own end zone. A holding penalty on CB James Pierre sent the Steelers back 10 yards, and they would begin their drive at their own 32.

On 3rd and 9 after a drop by Olszewski, Trubisky hit RB Jaylen Warren in the flat and he was able to pick up 14 yards and a first down. On the next play, Warren gained eight yards and the Steelers had an additional 15 yards tacked on due to an unnecessary roughness call against cornerback Marcus Peters. On 2nd and 8 from the Baltimore 17, OLB Tyus Bowser sacked Trubisky for a loss of five, and the Steelers couldn’t convert on 3rd and 13 as Trubisky’s pass was incomplete, intended for Diontae Johnson in the end zone. Pittsburgh ended the drive scoreless as K Chris Boswell’s 40-yard try, his first since Week 7, was blocked by Calais Campbell.

The Ravens picked up a first down on a 3rd and 1 conversion by FB Patrick Ricard. On 3rd and 4 a few plays later, TE Mark Andrews gained seven yards and a first down, and then Dobbins ran for 14 yards to the Pittsburgh 32. Dobbins ran for another seven yards, and then Edwards picked up the first down with a seven-yard gain. Pittsburgh finally got a stop, but the Ravens were deep in field goal range and Tucker nailed a 30-yard try and the Ravens went up 16-7 with 3:19 left.

The Steelers hit an explosive on their second play of the drive, as Trubisky went deep to Johnson for 37 yards. The Steelers gained an extra 15 yards due to a roughing the passer call, and then Trubisky hooked up with TE Connor Heyward for 13 yards down to the Baltimore 10. Pittsburgh quickly had a 1st and Goal. A few plays later, Trubisky threw a dart to Freiermuth in the end zone, and his touchdown cut the Ravens’ lead to 16-14 after Boswell’s made extra point. With 2:30 left, the Steelers would try to stop Baltimore and get the ball back down by just two points.

The Ravens faced a 3rd and 3 at their own 28 with 2:14 left, and Edwards was able to run for six yards and a first down to clinch the Ravens’ win.

The loss drops the Steelers to 5-8. They will head to Bank of America Stadium to take on the Carolina Panthers next week. The Ravens move to 9-4 with the win.