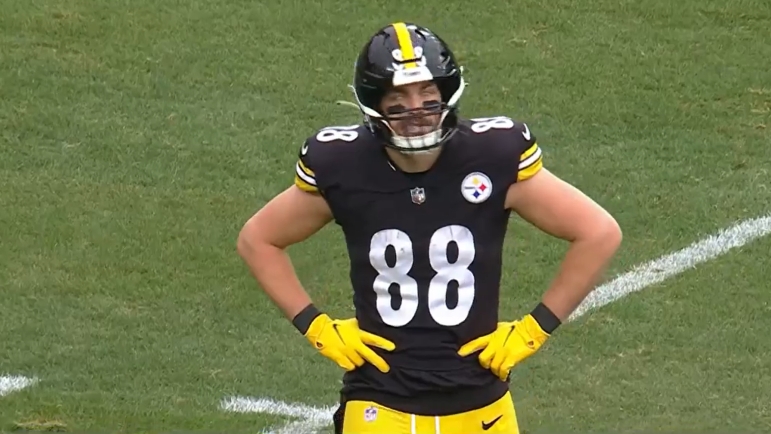 Did you exit the weekend wondering why Pittsburgh Steelers tight end Pat Freiermuth only played 31 of the teams 55 offensive snaps on Sunday against the Baltimore Ravens? If so, Steelers head coach Mike Tomlin essentially answered that question on Tuesday during his weekly press conference. In short, Freiermuth was dealing with an injury in-game.

“[Pat] Freiermuth I think is just managing the foot injury that caused him to miss a piece of time in the game,” Tomlin said on Tuesday. “He returned in the game and was able to finish and I would imagine that his level of participation is gonna increase as we push through the week.”

So, when did Freiermuth get injured on Sunday against the Ravens? It’s hard to know for sure but it’s worth passing along that the second year tight end out of Penn State was not on the field from offensive plays three through seven. He was on the field for just 19 of the first 30 first half plays on Sunday.

Freiermuth was targeted a total of six times in Sunday’s loss with two of those coming in the second half. He caught both of those second half targets with one being a touchdown reception.

It’s worth noting that two of the targets to Freiermuth in Sunday’s game were intercepted by Ravens’ linebackers and in the high red zone area of the field at that. He finished the game with three catches for 33 yards and the score. Those 33 yards is now his third-lowest output of the season.

Missed playing time aside on Sunday, Freiermuth still graded out well overall against the Ravens, according to Pro Football Focus. In fact, Freiermuth now enters week 15 as PFF’s second highest graded tight end in the NFL (80.7) – behind only Travis Kelce of the Kanas City Chiefs. That’s certainly great company for him to be in in just his second NFL season.

Freiermuth enters Week 15 with 55 receptions for 630 yards and two touchdowns. He needs just eight more receptions to exceed his 2021 rookie season amount. He’s already topped his receiving yardage total for 2021, which was 497.

The Steelers first injury report of Week 15 will be released on Wednesday and thus we might see Freiermuth listed on it. Even if he is, it sounds like he will be ready to play on Sunday against the Carolina Panthers.