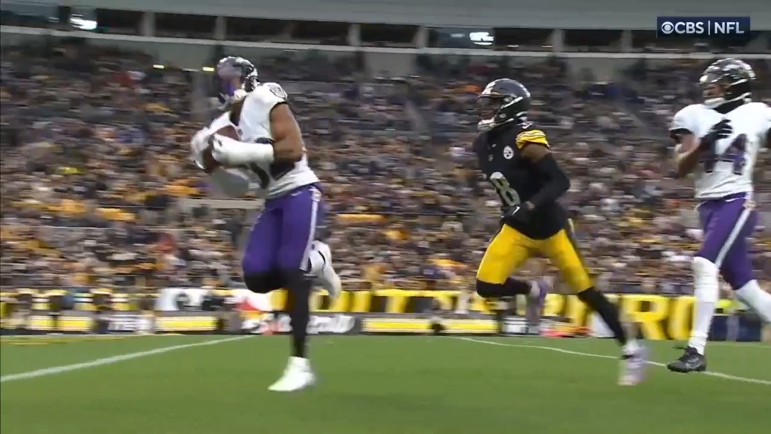 The Pittsburgh Steelers couldn’t pick up their third straight win and continue to build momentum, losing 16-14 to the Baltimore Ravens at Acrisure Stadium. After Kenny Pickett exited the game with a concussion, Mitch Trubisky took over and he struggled with turnovers, throwing three interceptions, two of which came when the Steelers had a chance to score. Center Mason Cole said the Steelers left at least nine points on the board between Trubisky’s interceptions and a blocked field goal by defensive lineman Calais Campbell that would’ve cut the Baltimore lead to 13-10.

“We had two red zone turnovers and a blocked field goal. Likely nine points we left out there. Difference in the game,” Cole said via Chris Adamski of TribLive on Twitter.

“Calais, best all-time at blocking field goals and made a heck of a play in a crucial moment. Just couldn’t make the comeback happen.”

Campbell has nine career field goal blocks, and this one was certainly big. If Boswell had made the field goal, then Baltimore’s next field goal would’ve made their lead six points instead of nine, and Trubisky’s touchdown pass to tight end Pat Freiermuth would’ve tied the game, and Boswell’s extra point would’ve given the team a 14-13 lead. The inability to score on that drive and subsequent defensive breakdown, allowing Baltimore to chew clock on a 13-play, 57-yard drive that took 7:55 off the clock led the Steelers to fall two points short.

The turnovers were probably the bigger issue though, as Trubisky threw an interception with the Steelers at the Baltimore 17 and the Baltimore 23. If Pittsburgh had a chance to score on either of those two possessions, the blocked field goal wouldn’t have been such a big play in the game. Instead, Trubisky made bad throws over the middle of the field and right into the hands of Baltimore linebackers. Other than the turnovers, it was a fine performance by Trubisky (22-30, 276 yards) but you just can’t turn the ball over that deep into opponent territory. It’s how you lose games and it’s why the Steelers lost tonight. Meanwhile, the Ravens were able to turn Smith’s interception into a field goal of their own on the ensuing drive that put them up 13-7 late in the first half.

The loss is a crushing blow for a Pittsburgh team that was gaining momentum late in the season. A win puts them at 6-7 with an outside shot at the playoffs, and with matchups against the Carolina Panthers and Las Vegas Raiders the next two weeks, there would’ve been hope. At 5-8, that hope is dying. Add on the fact that it was such a winnable game for Pittsburgh, and this one definitely stings.