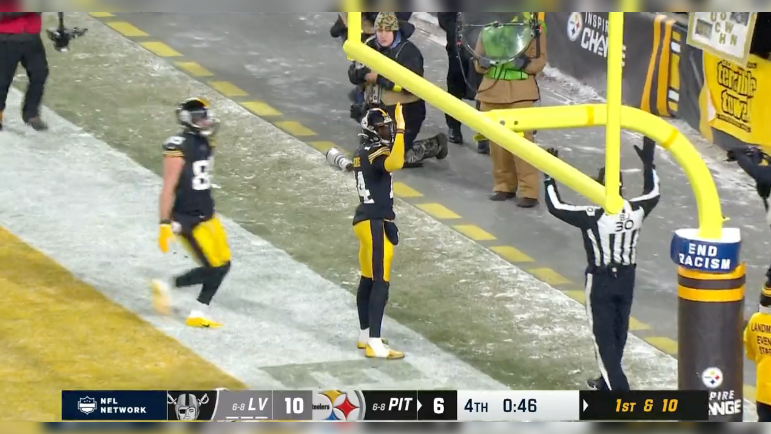 The Pittsburgh Steelers are down 10-6. 2:55 left in the fourth quarter. Two timeouts left. Ball on their own 24-yard line.

What could go wrong, right?

Well, a lot of things based on how this offense has played at times throughout the 2022 season. While the offense has shown glimpses of competent offensive play, sustaining long drives down the field and putting points on the board, they have been anything but consistent.

This is the same offense that failed to do anything in the second half against the Browns, Patriots, Dolphins, etc. They would move the ball in-between the 20s, but would always fizzle out in the red zone when attempting to score the touchdown.

Given that the offense hadn’t scored more than six points in the first 57:05 of the game and given the inclement weather, pulling off a game-winning drive late in the fourth quarter didn’t appear likely to say the least.

But they did it.

The Pittsburgh Steelers braved the frigid temperatures and pulled off the fourth quarter comeback Christmas Eve against the Las Vegas Raiders, winning by a final score of 13-10. The offense was stagnant for most of the football game, managing only two field goals until 2:55 left in the fourth quarter when Pittsburgh engineered a ten play, 76-yard drive which was capped off by a TD pass from QB Kenny Pickett to WR George Pickens.

RB Najee Harris took the stage after the game on NFL Network and was asked about the final drive and what he was saying to the rest of the team as they prepared to defy the odds and complete the game-winning drive.

“That’s what I was telling the rest of the guys,” Harris said to the cast of NFL GameDay on their Twitter page. “I was saying, ‘If you guys get the ball, make sure guys get vertical or get out of bounds.’ That’s what we did. I said make sure we be disciplined too, because a lot of times we mess up like with mistakes when we kill ourselves. And I think this time man, we actually executed and did a good job of finishing the game out.”

.@ohthatsNajee22 talks us through the game winning drive 💪#HereWeGo pic.twitter.com/NpML5bXvOk

Harris put it perfectly. The offense for so long would set themselves back with self-imposed penalties, costly turnovers, or missing completions of critical downs. That happened throughout the game on Saturday night with QB Kenny Pickett throwing an INT, normally a kiss of death to the team’s chances of clinching victory. Thankfully, the defense came to play in this matchup, keeping a lid of the Raiders’ offense long enough to give Pittsburgh one more chance to drive the field for the go-ahead score.

While the offense has been anything but spectacular this season, they came up in the clutch when they needed it most tonight. In what felt like a must-win game to honor the late Franco Harris, the young core of Kenny Pickett, Najee Harris, Pat Freiermuth, and George Pickens all make crucial plays to string together a 76-yard drive to win the game. The offense still needs to work on putting together a full football game, but much like how they were able to score the go-ahead TD against the Colts a few weeks ago, the offense showed signs of growth doing the same at home against the Raiders on Christmas Eve.