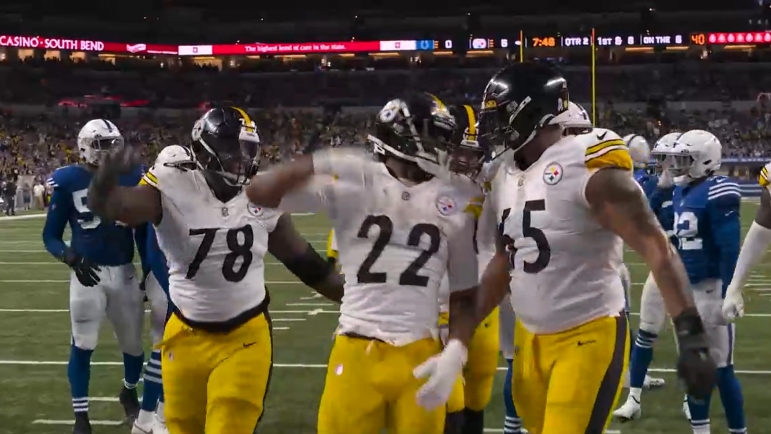 Najee Harris isn’t trying to downplay how tough this weekend’s game against the Baltimore Ravens will be. Figuratively and literally. A physical, intense game like all Steelers/Ravens matchups on top of the Ravens’ entering this game tied for the league’s second-best run defense. A group that’s only gotten better, they’re essentially the NFL’s top unit. For Harris and this Steelers’ run game on a hot streak, if they’re going to be the best, they gotta beat the best.

“The Ravens have a good, defensive team, and they have a good run defense,” he told reporters via Steelers.com. “This will be our biggest challenge now. I think we’re ready for it.”

As noted in our defensive scouting report, the Ravens have one of the league’s stingiest front sevens. A strong defensive line led by veteran Calais Campbell, the 36-year old has been in the NFL since 2008, the year the Steelers last won the Super Bowl. For more perspective, Harris was just ten years old when Campbell was playing on Sundays.

Baltimore’s linebackers are top-shelf with an improving Patrick Queen and acquired Roquan Smith, brought over from Chicago at the deadline. Two fast-flow linebackers who take away the perimeter game, Smith is an everydown player who has performed as expected when the Ravens shipped a second-round pick for him.

Since the Smith trade, the Ravens easily have the best run defense in football. They’re allowing just 2.6 yards per carry per game, nearly a half-yard better than any other unit in football and more than a full yard better than the Steelers’ run defense, which certainly has improved since last season. In last week’s win over Denver, Broncos’ running backs averaged 2.57 yards per attempt with a long of just ten yards. Few teams are able to two-gap and tackle as well as Baltimore and they play great team run defense with the likes of DBs Marlon Humphrey, Chuck Clark, and rookie Kyle Hamilton all helping out.

But Pittsburgh’s rushing attack is in a far better place than it has been in years. They’ve run for 100+ yards in five straight games, had a 200+ yard performance against the New Orleans Saints, with a run game that’s been able to control the clock and the game. The o-line is gelling and making fewer mental errors while Harris looks healthy for the first time all season. Unstoppable force is probably a touch too strong to call this unit against the Ravens’ immovable object but Sunday will be a key litmus test for how good this rushing attack really is.

Harris, like the rest of this offense, is up for the challenge.