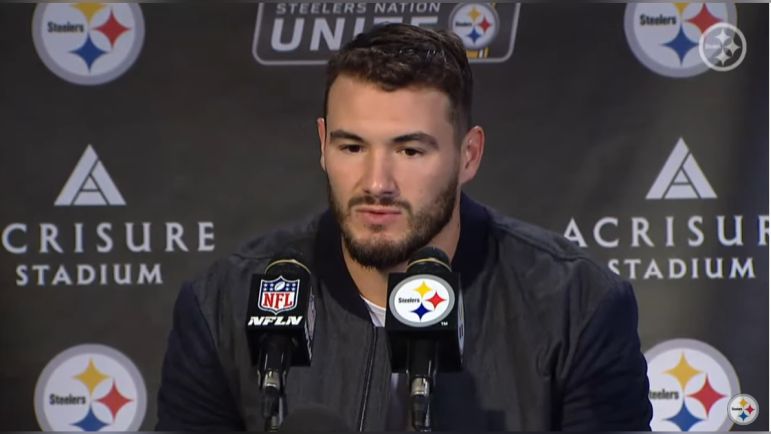 There were two versions of Mitch Trubisky in Sunday’s game against the Baltimore Ravens. A good version who made plays, led drives, put the Steelers in position to come away with points. The other version was the bad one. The guy who led his team into scoring position and was often the reason why they came away empty-handed.

Speaking to reporters after the game, Trubisky admitted he was overaggressive and his turnovers were costly in the game.

“I just wanted to go out there, run the offense, obviously was aggressive, overly aggressive at times which showed up with the turnovers,” he told reporters postgame via the team’s YouTube channel.

Trubisky threw three interceptions, back-breaking plays in a closely contested game, a two-point loss for the Steelers. The first was thrown over the middle to Pat Freiermuth, undercut and picked by LB Roquan Smith.

The second was nabbed by the Ravens’ other linebacker Patrick Queen, picking off another throw for Freiermuth over the middle. And the third a deep shot into double-coverage intended for Diontae Johnson.

There’s only been two quarterbacks this season to come off the bench and fire three picks. Kenny Pickett in Week 4, replacing Trubisky, and Trubisky today, replacing Pickett.

Overaggressive was a word he used repeatedly. There’s a balance every quarterback has to make between taking chances and settling and Trubisky did hit big plays down the sideline. But in the red zone, when things get tight, decisions are magnified. And Trubisky struggled.

“In the red zone, I wanted to be aggressive. I think looking back at the film, once we look at it, I think I could be a lot better with my eyes and then be smart and know when to check it down.”

With the loss, the Steelers drop to 5-8. They’d have to run the table to even have a chance at the 7th Wild Card spot and even then, those odds look slim. Pittsburgh’s season has been one of when they turn the ball over and when they don’t. When they don’t turn it over at all, they’re 5-1. When they turn it over even once, they’re 0-7. And three times certainly wasn’t what the Steelers could get away with to beat a stout Ravens’ team.

“The problem was I was turning it over down the red zone. We gotta come away with points. At least field goals…they’re known for taking the ball away and I just gotta be smarter with my decisions and not forcing it down there.”

An obvious statement. A true statement. And a mission he did not accomplish. One that will essentially end the Steelers’ season.