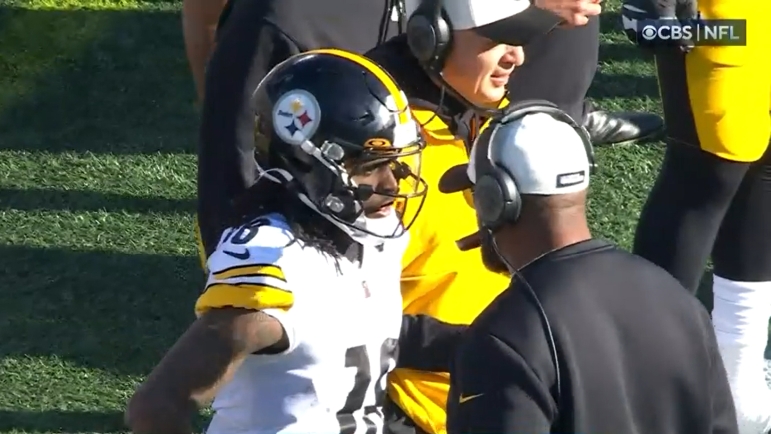 When Tomlin was asked about the discipline of his football team after the Steelers got a couple unsportsmanlike conduct penalties called against them Sunday in Carolina, Tomlin recognized this issue with picking up those penalties, but also doesn’t think that his team has a discipline issue overall when it comes to their character.

“You know, if you are talking about a couple of plays that transpired last Sunday, not good,” Tomlin said to the media Tuesday on video from the team’s YouTube channel. “But largely, I do feel good about the overall discipline of us, certainly.”

The Pittsburgh Steelers picked up a couple of unsportsmanlike conduct penalties against the Panthers on Sunday with WR Diontae Johnson getting flagged for taunting after picking up a first down on a catch and S Marcus Allen picking up potentially the dumbest penalty of the year after running to the Panthers’ sideline and exchanging words with the entire Carolina bench.  Allen was remorseful after the game, stating that his emotions and passion got the better of him, leading to the unnecessary penalty which gave Carolina another chance to put points on the board.

Tomlin mentioned after the game that his team needed to play smarter and avoid those dumb 15-yard penalties that set the team back behind the sticks or give the opposition a chance to take the field and score with good field position. However, two days removed from the game, Tomlin approached the issue will a cooler approach, stating that one bad instance from either player shouldn’t dictate whether his team has a discipline issue.

While I partially agree with Tomlin’s comments, being that both Allen and Johnson aren’t known for being troublemakers, there does need to be a sense of accountability so the “prisoners don’t run the asylum” per se. Not saying that Johnson or Allen are close to the same level as undisciplined as former Steelers including Antonio Brown, Le’Veon Bell, and even Chase Claypool to a degree, but if there isn’t that sense of accountability by the coach to his players, the players will see that and start to test the leniency of the coaching staff. Therefore, while I do agree with Tomlin on the fact that his team in general doesn’t have a character problem, I do think he does need to be better at holding his players accountable for costing the team as a whole.