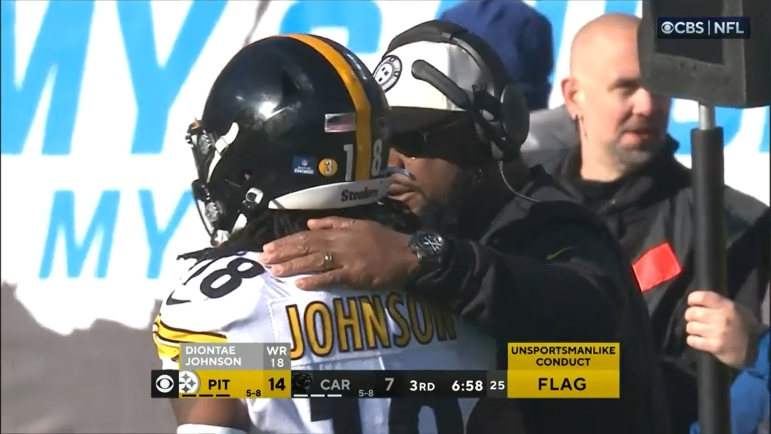 The Pittsburgh Steelers came away with an impressive and well-rounded victory against the Carolina Panthers. As good as their game was on both sides of the ball, a few costly penalties made the win harder than it should have been. In his opening remarks during the post-game interview, Head Coach Mike Tomlin pointed out penalties as something the team must learn from according to the team’s YouTube channel.

“We could have played smarter in some instances,” Tomlin said in his opening remarks in the post-game press conference. “Penalties are not how we choose to live, particularly ones of the 15 yard variety. Hopefully there are opportunities to learn from that. It’s good to learn with the win.”

The Steelers had seven penalties, which cost them 81 yards during the game. Of those seven, two stood out as particularly unnecessary and avoidable.

The first penalty took place in the team’s 21-play opening second-half drive. After catching an eight yard pass to covert a third down, receiver Diontae Johnson was called for unsportsmanlike conduct after taunting the defensive back, backing the team up 15 yards. Given this offense’s red zone woes, this penalty could have easily led to the Steelers settling for a field goal, and it’s one that Johnson must avoid moving forward.

The second penalty took place after a momentum-building sequence by the Steelers’ defense. That is, linebacker Alex Highsmith and defensive end Cameron Heyward sacked Panthers’ quarterback Sam Darnold on back to back plays, bringing up a 4th and 27. While the Panthers were settling for a punt, special teams linebacker Marcus Allen ran to the Panthers’ huddle, seemingly to taunt the opposing players. This led to an automatic first down and a field goal for the Panthers, putting a halt to the Steelers’ momentum.

While the two penalties did not impact the outcome of the game, they easily could have. As recently as last week against the Baltimore Ravens, the Steelers have no shortage of losses resulting from easily avoidable mistakes. Coming into this game, the Steelers were one of ten teams without an unsportsmanlike conduct penalty. In terms of total penalties, they were around league average at 15th.

Moving forward, Tomlin will likely make it a point to not tolerate such easily avoidable penalties. As he said, however, it’s better to learn with a win than a loss. For now, the Steelers will keep their unlikely playoff hopes alive, and will hopefully not commit undisciplined mistakes moving forward.