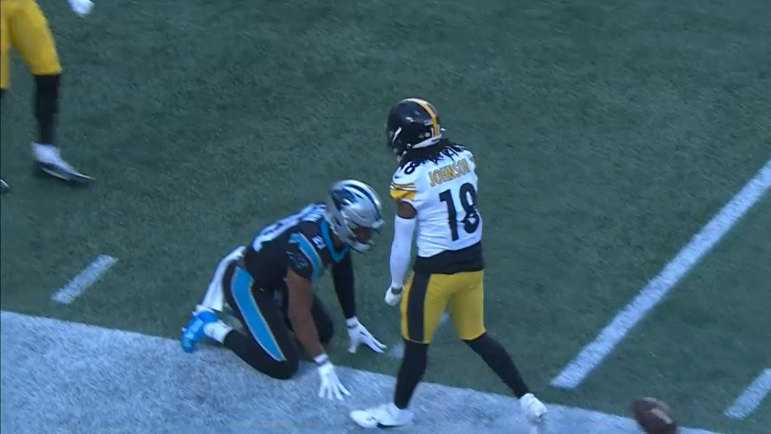 The Pittsburgh Steelers had two extraordinarily dumb penalties today, yet they managed to avoid it damaging them too much. Wide receiver Diontae Johnson is probably grateful for the abject stupidity of safety Marcus Allen’s decision, however, to jump into the Carolina Panthers’ huddle and jaw at them after the defense got a defensive stop on third down and knocked them out of field goal range.

Were it not for that, we would probably be talking even more about Johnson’s taunting penalty after making a big catch in the second half, which pushed them back to the Panthers’ 22-yard line. He had just picked up a big conversion on 3rd and 6 on a great effort eight-yard catch to get down to the seven.

And then he was flagged for taunting as he celebrated over the defensive back whom he escaped after the catch. But it wasn’t quite like that, he said after the game. “He was just there and I didn’t even see him there”, he told Mike DeFabo of The Athletic. “It was in the moment. It wasn’t nothing toward him or whatever”.

Diontae Johnson has his gain reversed on a taunting foul, but gets the 1st & 10. More in our liveblog https://t.co/igYWVXv0K6 pic.twitter.com/jo9ppAXhxp

I’m not sure I buy that, but if it’s the story he’s sticking to, that’s fine by me. It ultimately doesn’t make a difference either way, because what’s done is done and the fine for the penalty is pretty much automatic. The taunting counts as an unsportsmanlike conduct penalty, and two in one game would have meant an automatic ejection as well.

The NFL has been cracking down on taunting penalties in recent years, something that hasn’t exactly been welcome by fans. Former Steelers linebacker Cassius Marsh learned the hard way while with the Chicago Bears playing Pittsburgh just how seriously they are taking it.

Essentially, you can’t celebrate in the face or obvious direction of your opponent for fear that it will incite a confrontation. But the Steelers and Panthers didn’t really seem to need much incitement, as there were a few incidents where the teams got together after the whistle.

This moment wasn’t one of them, fortunately, and the offense even survived the penalty. Though it cost them 15 yards, they still had it 1st and 10. Johnson himself caught a nine-yard pass on 2nd and 10, and then a fullback dive from Derek Watt moved the chains. Najee Harris got it down to the one on two carries, and then Mitch Trubisky got it in for a touchdown.