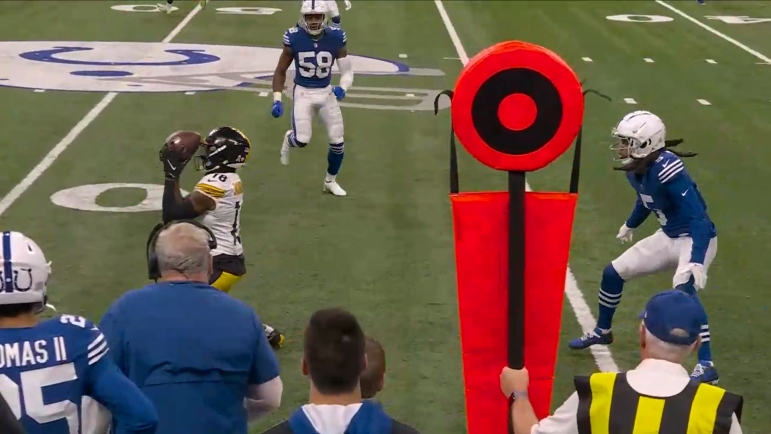 Pittsburgh Steelers wide receiver Diontae Johnson has had a rough year this season, failing to record a touchdown, but that does not mean he is not involved heavily in the offense. Johnson currently leads the team in targets with 94, and saw a team high eight in Monday night’s win over the Indianapolis Colts.

Speaking with Bob Pompeani on the Mike Tomlin Show streamed via the Steeler’s YouTube channel, Pittsburgh head coach Mike Tomlin spoke on how important Johnson is to the Steelers offense.

“Diontae [Johnson] is going to be a major component of what we do, he knows and understands that” said Tomlin. “He has to be if we want to be successful.”

Despite Johnson’s stat line not looking all that great, 56 receptions for 505 yards for an average of nine yards per catch, he has still impacted the offense tremendously. Johnson is always a threat on the field and gets treated like a number one receiver leading to coverage being rolled over to him. This has led to other receivers like George Pickens or Chase Claypool (when he was on the team) to get open easier.

Despite Johnson’s importance to the offense, Tomlin does not believe it is necessary to force feed Johnson the ball, instead opting for a spread the ball around approach, though Johnson saw a quarter of his targets on the opening drive Monday night.

“If anything [what] we were doing at early portions of the game was just spreading the ball around taking what they were giving us.”

One of the reasons Johnson gets a lot of targets is the fact that he is good at getting open. His calling card is his route running ability which allows him to create space between him and the defender guarding him making an easier throw for the quarterback. This was a big reason he was Ben Roethlisberger’s favorite target last year, and why both Mitch Trubisky and Kenny Pickett have targeted him so often this season.

While some have been upset with Johnson’s production this year considering he was just extended this past offseason, part of the reason is due to the offense not being that good and the playcalling. With Johnson’s route running ability slant routes could be highly successful, but for most of the season he has not run routes near the middle of the field, instead staying near the boundary. If offensive coordinator Matt Canada drew up more routes that have him running across the middle, I believe you would not only see better numbers for Johnson, but also for the Steelers offense as a whole.