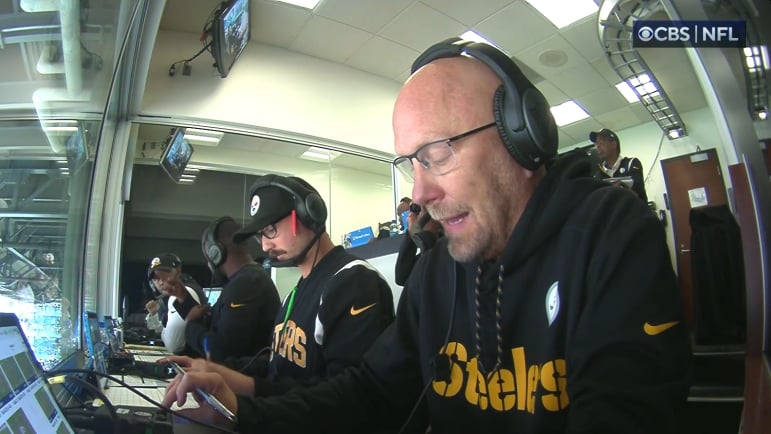 The Pittsburgh Steelers and more specifically their offensive coordinator Matt Canada have come under fire this season for having a simple, vanilla, and repetitive offensive playbook. Multiple times this season, opposing players have come out and said something to the effect of “they run the same plays.”

Today, Canada met with the media and was asked if his offensive scheme was complicated.

Canada has been crucified in his first two seasons for subpar offensive play, and rightfully so. The Steelers have ranked near the bottom of points scored the past two seasons, but I don’t think that is necessarily due to the simplicity of the offense.

Having a simple offense is probably a good thing right now as the Steelers are starting a rookie quarterback in Kenny Pickett and a very young offense. The simplicity helps them learn the offense faster. Football is a game of skill even more than it is of brains. While the brains are clearly important, at the end of the day the players on the field need to execute. A defense may know exactly what is coming, but if the play is executed to perfection they’ll have a damn hard time stopping it.

Canada clearly has his faults, and his playbook needs to get bigger and better, however the simplicity part isn’t the issue. As Pickett has gotten more comfortable with the offense the offense has gotten better, especially in the first half of games. The problem, recently, comes in the second when teams see the Steelers start running the same plays over again. Instead of creating a more complex playbook, there needs to be more plays in the playbook.

Pittsburgh’s offense has been struggling for a number of reasons this season, but the simplicity of the offense is not the problem. Now saying that does not mean Canada is not a problem. After what happened last year he should have expanded his playbook and learned how to draw up some better plays, but that is not about simplicity.

Simplicity is good, and simple is often better than complex. There just needs to be more plays and plays need to be executed better. If Canada is back next year, which is becoming more and more likely due to the improving play of the offense in recent weeks, he has to add more plays to the playbook this offseason. If he does that, I bet the offense does not hit those second half slumps.