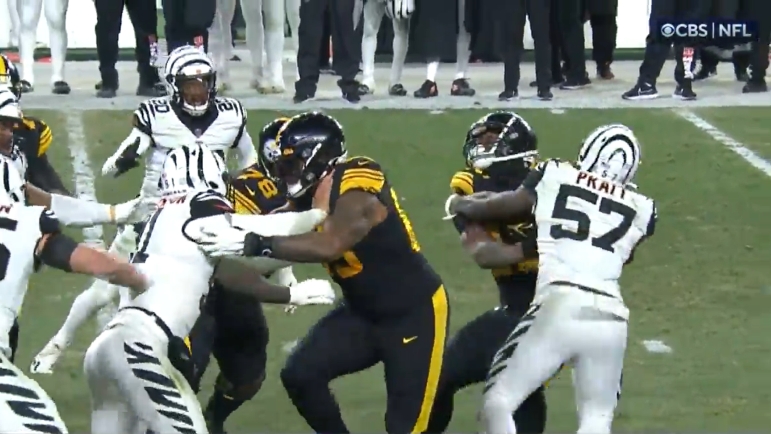 The Pittsburgh Steelers looked like they might actually have something going last night at Acrisure Stadium. Although a troublesome first-half effort from the defense allowed the Cincinnati Bengals to put up 17 points, the offense suddenly had a spark of life, posting 20 points in the first half. That matched their season high as a unit for a full game on the year.

They did manage to post 10 points in the second half, but seven of it was on a too-little, too-late touchdown with under a minute to play that still saw them trail by seven points. The offense was largely anemic in the third and fourth quarters up until that.

Perhaps it’s because it became obvious to Bengals defenders what the Steelers were trying to do. Not that we haven’t ever heard this before—about Pittsburgh or about other offenses—but you do pick things up after seeing them repeatedly.

For example, Bengals linebacker Germaine Pratt credited the second-half turnaround to “just settling down”, via Bryan DeArdo of CBS Sports. He added, “We knew what they were going to do. They like to do the same plays over and over”.

This isn’t going to be a revelation to regular readers, nor perhaps indeed to the average fan who actually watches the games. Even we have covered how small the Steelers’ actual gameday calls can make their playbook look.

Sure, the passing game has started to incorporate more work over the middle in recent weeks following the bye, although that did not seem to be as prevalent in last night’s game as it was in the win over the New Orleans Saints.

This is, of course, the domain of offensive coordinator Matt Canada, who is in his second season in that post and third overall with the Steelers. He has been under fire for quite some time now and deservedly so for his unit’ poor performances under his watch, not so long ago ranking last in the league in points scored.

The 30 that they put up on Sunday will help perk that average up a bit, but at the end of the day, it’s still another loss, and the showing of the second half has to weigh more significantly than the first. Because the job is to figure out why nothing seemed to work in the final 30 minutes.

The Steelers did not record a single first down on four complete possessions in the fourth quarter. They only ended their final drive in the period with a field goal because they started in the Bengals’ 21. Their three subsequent drives produced a combined two first downs before finally putting together one last desperate 72-yard touchdown drive on their final possession with under four minutes to play.