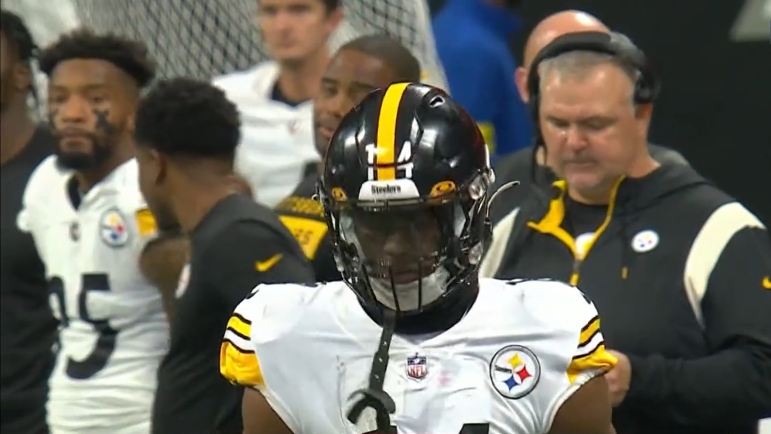 Of course, Stewart played wide receiver before quarterback full time in the black and gold, earning the moniker “Slash” during his early days in the NFL with the Steelers after a great career as a member of the Colorado Buffaloes.

There was the desire to have the ball thrown his way as a receiver in hopes of simply making a play with the football in his hands when he played receiver. However, there was also the pressure as a quarterback to spread the ball around and block out the noise from some disgruntled receivers that tried to call for the ball more than others.

So, when Stewart spoke Thursday during an appearance on 93.7 The Fan’s PM Show with hosts Andrew Fillipponi and Chris Mueller about current Steelers rookie wide receiver George Pickens and the storyline surrounding his display of frustrations in Week 13 at Atlanta, his words carried more weight than others on the topic.

“This is not an indictment, to me, on George Pickens. I won’t lie to you. Everyone has their own way of dealing with the frustrations of the situation,” Stewart stated to Fillipponi and Mueller, according to audio via 93.7 The Fan. “Because when you see the game is getting out of hand to the point where the momentum is shifting, and you’re open multiple times, it’s a natural tendency for an athlete to get a little frustrated.

“…to see those opportunities not presenting themselves, that’s the frustration.”

Pickens is a hard worker, one that wants the football and wants to make plays for his team. That’s where the frustrations on Sunday against the Falcons — and earlier in the season against the Browns and Jets — come from. Every player has their own way of expressing their emotions, and Pickens just so happened to get caught on camera.

While he must learn how to deal with that better moving forward in his career, that competitive spirit is something that makes Pickens who he is, and is why the Steelers targeted him in the draft in the first place. The frustrations can get to him on the field, but controlling those emotions a bit better and understanding the moment overall will go a long way for Pickens.