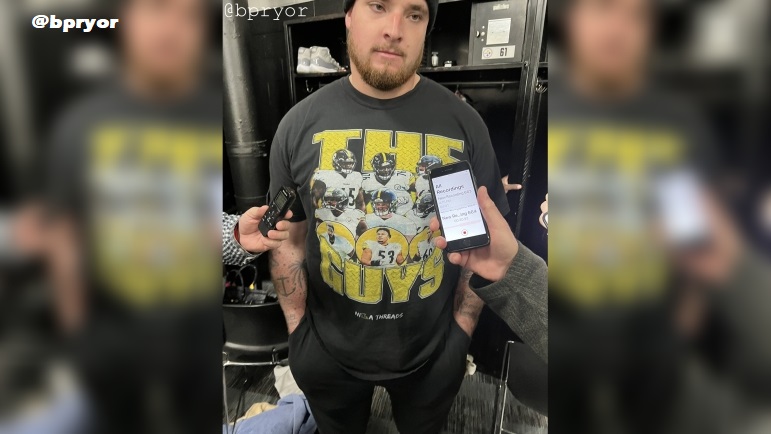 After the game was over, C Mason Cole spoke to the media in the locker room and was supporting a certain T-shirt repping all the members of the offensive line on it with the words “The Guys” surrounding all the players.

Center Mason Cole said these shirts just showed up at the facility in the last two weeks and he wore it today, not knowing when he picked it out that the Steelers OL and run game would have a dominant day: 156 yards, 3 TD pic.twitter.com/ahzTRaZZbv

Per ESPN’s Brooke Pryor, Cole said that the shirts were delivered to the facility for the members of the OL room. He couldn’t have picked a better day to wear it as Pittsburgh controlled the LOS against the Panthers defense, running the ball a whopping 45 times compared to throwing 22 passes in the contest as the offense picked up 156 yards in the contest.

In a game where the opposing Panthers’ running game presented problems after being on a hot streak the last several games, it was the Pittsburgh running game that ruled the day. The offensive line was a big part of that, springing Najee Harris and Jaylen Warren into the second level of the defense while getting blocks to get the edge for more successful outside runs.

The Steelers’ running game has been a pleasant since the bye week especially on the ground. They have gained over 100 rushing yards in all but one game since Week 8, becoming the identity of the offense. Hopefully this trend can continue as the Steelers attempt to close out their final three games and finish the season above .500 and avoid Mike Tomlin’s first losing season as the head coach of the Pittsburgh Steelers.