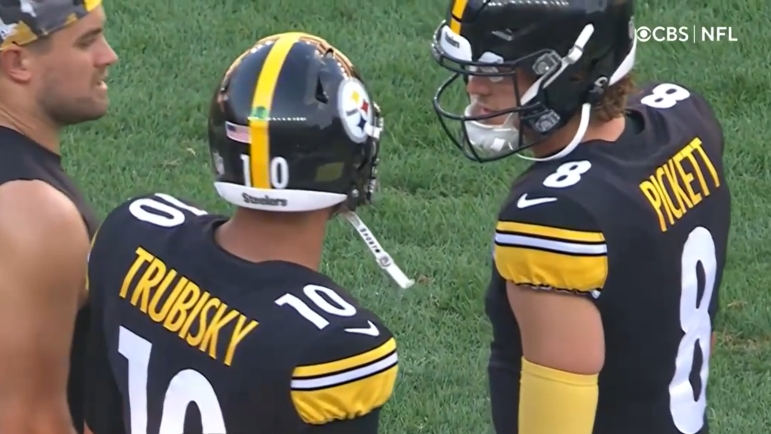 Sitting at 5-8 heading into a Week 15 matchup against the Carolina Panthers, the Pittsburgh Steelers need to win out and probably get some help if they want to sneak into the playoff field. Heading into a must-win game, the Steelers are banged up, with rookie quarterback Kenny Pickett exiting the team’s Week 14 loss against the Baltimore Ravens with a concussion, leaving his status for Week 15 murky. Even if Pickett can’t play though, former Pittsburgh Steelers quarterback Ben Roethlisberger’s opinion on the game doesn’t change. On episode 16 of his Footbahlin’ podcast, Roethlisberger said he’s just as confident with Mitch Trubisky at quarterback as he is with Pickett.

“I’d be fine with either guy. I think both guys bring a lot of the same things, both can run well, both can throw well. Mitch obviously is more of a veteran, he’s been around, knows some stuff,” Roethlisberger said.

He further clarified that the reason his confidence level doesn’t change is that the Steelers need more than just good quarterback play to win games.

Roethlisberger’s point about the rest of the team stepping up is fair. Despite three interceptions by Trubisky yesterday, the Steelers were still in the game until late. The run defense broke down and the Ravens blocked a field goal in the fourth quarter which set up a long drive that put Baltimore up by nine that Ravens head coach John Harbaugh called one of the greatest drives in the history of the rivalry. Pittsburgh’s run game also wasn’t as strong as it had been, as their 65 yards on the ground marked the first time since coming out of the bye that they didn’t run for at least 100 yards as a team. If the defense and run game had been better, or their field goal attempt to make it a three-point game hadn’t been blocked, the Steelers could’ve gotten away with the shaky quarterback play.

Still, I’m not sure I’d be more confident in Trubisky than Pickett right now. Pickett’s thrown 129 straight passes without an interception, and his ball security is a major asset for a team that’s yet to win a game with a turnover this season. I’m glad Trubisky is finally taking shots, but his first two interceptions were completely avoidable and his third was too, but it wasn’t as egregious as the first two. With a team that isn’t going to score a lot of points, not turning the ball over is paramount, and in recent weeks, Pickett has shown he’s capable of keeping the ball with the Steelers’ offense. Just for that reason, I’d say Pickett is a better option over Trubisky to help Pittsburgh win.

In the end though, Roethlisberger’s point is valid that the whole team has to step up. There’s probably a less than 1% chance this team makes the playoffs, but if they do, it will be because of a true team effort.