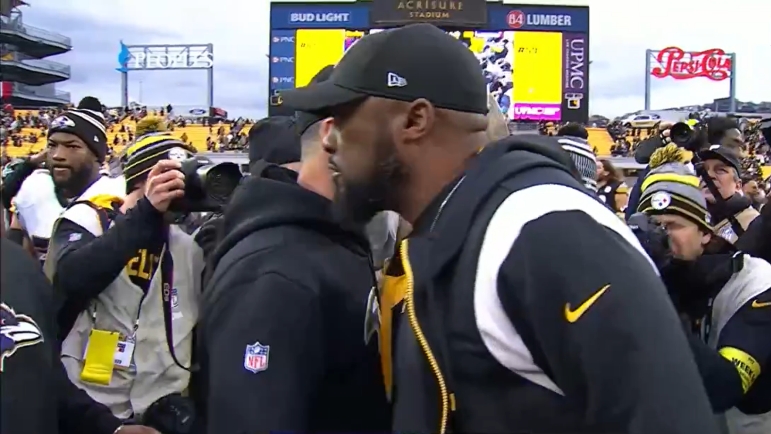 The Pittsburgh Steelers’ rivalry with the Baltimore Ravens might not quite have the prestige right now that it has had in the recent past—both of their matchups this season have been slated for 1 PM kickoffs, and really nothing has happened to suggest that was a bad call—but it’s still a series full of iconic moments.

It’s easier for us to remember the Steelers ones, of course, whether it’s the Troy Polamalu interception in the postseason back in 2008 or the Immaculate Extension touchdown by Antonio Brown on a Christmas Day game back in the Killer Bs era. There was even an Isaac Redman game-winning touchdown in there.

Ravens head coach John Harbaugh, however, thinks their final scoring drive should be considered one of the greats in the series. While not a game-winning drive, it proved to result in the game-winning points, led by rookie undrafted free agent quarterback Anthony Brown seeing his first NFL action.

“That drive in the fourth quarter will go down in history as one of the great drives in this rivalry”, he said in his opening remarks following today’s game, referring to a 13-play, 57-yard drive that ended in a 30-yard Justin Tucker field goal to make it a nine-point game across nearly eight minutes of game time.

Baltimore had actually just gotten the ball back off of a blocked field goal by Calais Campbell which would have made it a three-point game at that point had they connected. Instead, the Ravens were able to flip the tables and add on three of their own.

They had to start Tyler Huntley at quarterback with Lamar Jackson out injured. Huntley was knocked out of the game midway through the third quarter after a collision with safety Minkah Fitzpatrick as he attempted to keep the quarterback short of the sticks—successfully.

Brown had to come in at the next snap, on the following possession, which just so happened to be from the one-yard line. Harbaugh had him throw a pass on his first snap, a three-yard completion. Running back J.K. Dobbins busted out an 11-yard run on second down to give him some breathing room.

While that proved to be just a five-play possession, Brown’s next drive spanned the aforementioned 13 plays, and featured the rookie completing a seven-yard pass to tight end Mark Andrews on 3rd and 4 to keep it moving when they were on their own 47.

The rest of the possession was all on the ground, three carries by Dobbins and three by Gus Edwards, getting down to Pittsburgh’s 13 before stalling on 3rd and 4, held to no gain. Pittsburgh was able to to go down the field and score a touchdown after that drive to make it a two-point game, but the Ravens closed it out with 2:24 to play with three straight runs by Edwards.

Now, anything you do when you’re down to your rookie untested, undrafted third-string quarterback is going to take on heightened importance—the Steelers had their own moment three years ago when Devlin Hodges saw his first action against the Ravens, and then won a start a week later—but will anybody outside of that locker room remember it as one of the iconic moments in Steelers-Ravens history? I highly doubt it.