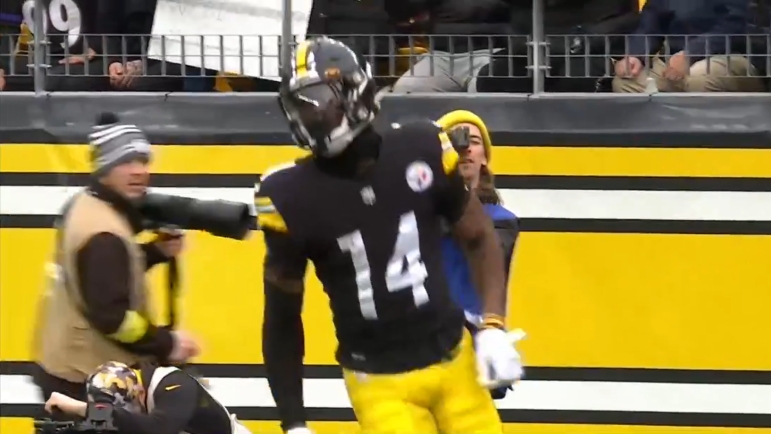 The Pittsburgh Steelers braved the frigid temperatures and pulled off the fourth quarter comeback Christmas Eve against the Las Vegas Raiders, winning by a final score of 13-10. The offense was stagnant for most of the game, managing only two field goals until 2:55 left in the fourth quarter when Pittsburgh engineered a ten play, 76-yard drive which was capped off by a TD pass from QB Kenny Pickett to WR George Pickens.

Pickens spoke to the media in the locker room following the win and securing the game-winning TD reception and why that score meant so much.

“That’s exactly what it meant to me … that score tonight because we haven’t had these situations before I told you guys,” Pickens said to the media Sunday on video from Chris Adamski’s Twitter feed. “It was really tonight and how it kind of played out really made it feel special. Christmas… you see so much stuff just added on. Today made it feel better than a normal win.”

George Pickens says it was a special win for a special night pic.twitter.com/5UneDYNXnZ

Pickens finished the game catching all five of his targets for 57 yards and the go-ahead score to put Pittsburgh on top with just seconds left to play. This had been an emotional week for the Steelers who lost an icon in Hall of Fame RB Franco Harris unexpectedly right before the 50th Anniversary of the Immaculate Reception and the retirement of his #32 jersey.

Pickens also mentioned that many other factors came into play as to why that moment was so surreal for him. Playing on Christmas Eve in the coldest game the Steelers have seen in decades adds to the magnitude of the moment as well as the fact that the offense engineered a long TD drive at the end of the game when nothing had worked previously to get the ball in the end zone had to provide a sense of elation for Pickens and the rest of the offense.

So many times, this season, the offense has shown that they can drive the field but tend to get in their own way in opponents’ territory before they can punch it into the end zone. That wasn’t the case Saturday night as Pickett, Pickens, and the offense capped off a successful drive with the score to seal the victory for the Steelers and put a bow tie on what has been quite the week to honor Pittsburgh’s fallen legend that may be gone but won’t be soon forgotten.

An emotional moment in Pittsburgh as Franco Harris' #32 jersey is officially retired. 🙏 pic.twitter.com/cpbufU6qgG