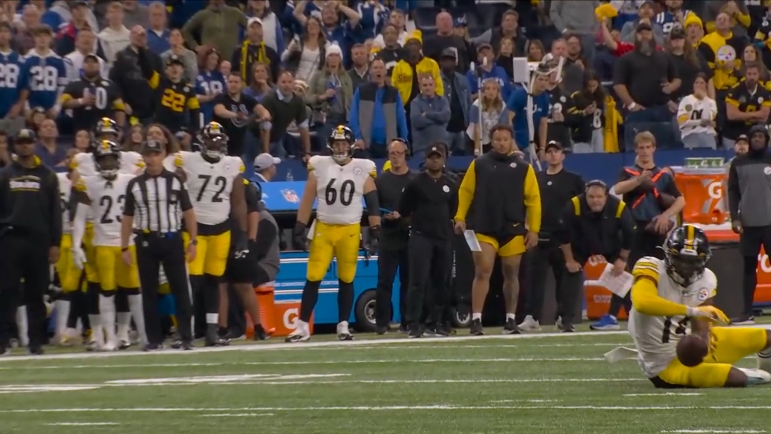 Pittsburgh Steelers rookie wide receiver George Pickens makes plays. Of that, there can be no doubt. But he doesn’t make all of them, and while he knows he can’t harp on the plays he doesn’t make, it’s not always easy. It drives him nuts to put the ball on the ground—but more on that in a bit.

While he finished Monday’s game with three catches on six targets for 57 yards, including two very nice grabs, plus a two-point conversion, there were also plays that he left on the field. One at least was almost certainly a drop, and he found himself in a bad place by the time he got back to the sideline, he admitted.

“I was just getting frustrated. I never want to be the reason we lost. When I dropped the ball, and stuff like that, I was telling myself let’s get back,” he said, via Teresa Varley for the team’s website. But he credited Diontae Johnson for helping him. “Diontae talking, it was a coping mechanism, trying to get me back in the groove. He was trying to keep me up.”

A rookie second-round draft pick out of Georgia, Pickens arguably was on the receiving end on what was the turning point of the game. After the Steelers had blown a 13-point lead in the third quarter, they were facing a 3rd and 9 deep in their own end on the first play of the fourth quarter.

Rookie quarterback Kenny Pickett made a great read and throw to get him the ball on that play, the two top draft picks hooking up on a critical 13-yard conversion. It was the start of an 11-play, 75-yard touchdown drive that supplied the game’s margin of victory.

Earlier in the game, of course, he had another great catch toward the sideline, which quickly got singled out on social media for praise, many noting that he tends to be good for at least one highlight reel catch on a weekly basis.

But he takes the negative plays seriously. Earlier in the year, he spoke with Jenna Harner about why he places such a huge emphasis on ball security. “It’s just because when I drop a ball I feel like, ‘Oh, he had a leg injury’. That all comes back up in my head,” he said, “so I really like to try to be perfect and try to make as many plays as I can just to show everybody—I don’t want to say I’m really ‘him’, but, whatever they think I am.”

He does have a few drops this year, and you can certainly include the one from Monday that you see in the headline above. It was a low-targeted pass, but obviously, one that he should have been able to complete.

But his talent is undeniable, and the most important thing he can do is to keep it out of his head. Johnson knows what can happen if you let those plays get to you. He got the yips a couple of years ago and he admitted then that it became a mental issue he had to work to overcome.