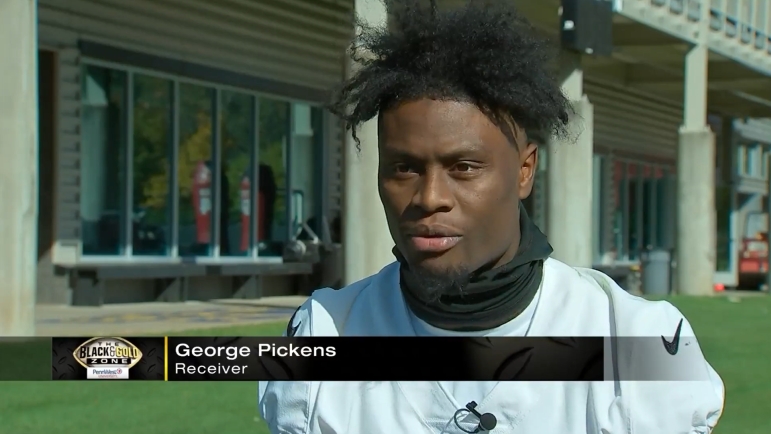 Pittsburgh Steelers wide receiver George Pickens is already having a pretty good rookie season, especially relative to the circumstances in which he has played up to now. He is gradually emerging, it seems, as the team’s number one receiver, or at least their most consistent playmaker, reeling in his first touchdown last week.

It’s been a long time coming, he feels. So much has, including the draft, having had to wait until the back half of the second round to hear his name. It’s part of the story of his now iconic post-draft video in which he watched himself get drafted, as he told Jenna Harner in an exclusive interview with WPXI.

“I was looking like that and I was standing in that stance really because I didn’t know that I was gonna be taken that late”, he said, “and I was getting to a point to where I was like, ‘Alright, if I go after this, then I’m gonna really know something’. And then ironically, I when right then, and that’s when you see the video”.

George Pickens makes seemingly impossible catches look routine on a daily basis. But there’s *so* much more to the 21 year old than just his playmaking abilities.

(including which Steelers Hall of Famer would make him starstruck if they ever met) pic.twitter.com/IZSQthsbHB

He went on to say that while he knows being drafted in the second round is nothing to sneeze at, he feels as though he was the most talented rookie in the draft class—and that a lot of teams knew it, but they found excuses to knock him for demerits. It fuels his desire for perfection today.

He wants to make sure that, before too long, he gives his critics no ammunition, nothing to say. That’s why he has become a perfectionist on the practice field. “I pride myself on catching literally every ball”, he said. “I dropped one ball and I got super mad”. But why, for just one ball?

“It’s just because when I drop a ball I feel like, ‘Oh, he had a leg injury’. That all comes back up in my head”, he told Harner, “so I really like to try to be perfect and try to make as many plays as I can just to show everybody—I don’t want to say I’m really ‘him’, but, whatever they think I am”.

Apparently referring to very talented men as simply ‘him’, or ‘HIM’, or ‘himothy’, has become a thing on social media (yes, I’m getting older, why do you ask?), but Pickens has been ‘him’ for many fans since he was drafted, and he has gradually been granted opportunities to prove himself to be that.

He’s not ‘there’ yet, so to speak, even if we rest under the assumption that it’s only a matter of time until we get there. He is certainly amassing an impressive highlight reel, and appears to be growing on a weekly basis, but obviously he needs to step up game in and game out.

He clearly has the talent. Do the Steelers have the talent around him to maximize his abilities? He’s building a rapport with fellow rookie quarterback Kenny Pickett, but there’s still so much about this offense that is in the process of coming together.

It does seem clear that whatever this offense becomes in the next couple of years, Pickens is going to be a central part of that. He will have to share targets with Diontae Johnson and Chase Claypool (and tight end Pat Freiermuth and running back Najee Harris), but if he keeps making catches that are the equivalent of posterizing dunks in basketball, then those targets are going to keep coming.

And those perfectionist reps on the practice field will continue to serve him well as he silences his doubters and makes general managers look back on this draft and ask themselves, ‘Why did we pass on this guy again?’