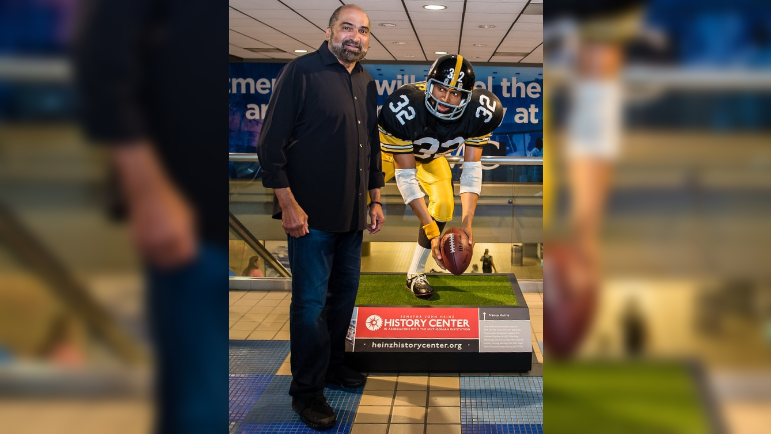 The death of Pittsburgh Steelers running back Franco Harris has sent shockwaves around the NFL with many active and former players posting on social media sending their condolences. In the Steelers locker room, the current players are grieving as well.

One of those players is defensive captain Cameron Heyward, and Wednesday when meeting with the media he talked about the importance of the Harris statue in the Pittsburgh airport, and in particular the importance the Immaculate Reception has had on the city of Pittsburgh.

“I tell my son, when we pass it [the Harris statue], ‘That’s Franco,’ and he is like, ‘Oh, that’s Franco,'” Heyward said in a video posted on the Steelers YouTube page. “I show him the play and that play just represents Pittsburgh. And you come to the airport, you understand that you’re not only just taking on the Steelers’ personality, you’re taking on a guy like Franco’s personality.”

The Harris statue in the Pittsburgh airport is something many fans who fly in all across the world take pictures with in awe. But, it does have an important meaning. In the 1970s, the steel mills in Pittsburgh were closing and many people were being laid off, yet the success of the Steelers during that time helped unite the city and give them something to cheer about despite the hard times.

To honor Franco Harris at PIT, his iconic Immaculate Reception figure has moved to the Center Core at the top of the escalators in the Airside Terminal. There is also a table with condolence books for travelers to sign or share their memories of Franco and his legacy. pic.twitter.com/nXazJQ1JV8

The Immaculate Reception was the start of the rolling in of the good times (at least in sports), as in the following eight seasons the Steelers won four Super Bowls and Pittsburgh became one of the most famous cities in America during the decade.

Tight end Pat Freiermuth also talked about that statue in his press conference Wednesday, even implying it is more important than the one of America’s first president, George Washington, that stands right next to it.

“I mean, you fly into Pittsburgh and you see his statue in the Pittsburgh airport, like no other places have that,” said Freiermuth. “There’s another statue of some guy, I don’t know.”

When a reporter told him that it was Washington, Freiermuth said half jokingly, “No one really pays attention to him.”

That really sums up how important Harris and the Steelers are to the city of Pittsburgh. The Steelers bring together almost everyone in the city that not many other things can, certainly not George Washington.

As we mourn the death of Harris, it is important to also celebrate his wonderful life. He has impacted so many people, and it is nice that the statue is still there in the airport so he can impact many more people as he greets those in an immaculate way as they enter the city of Pittsburgh.