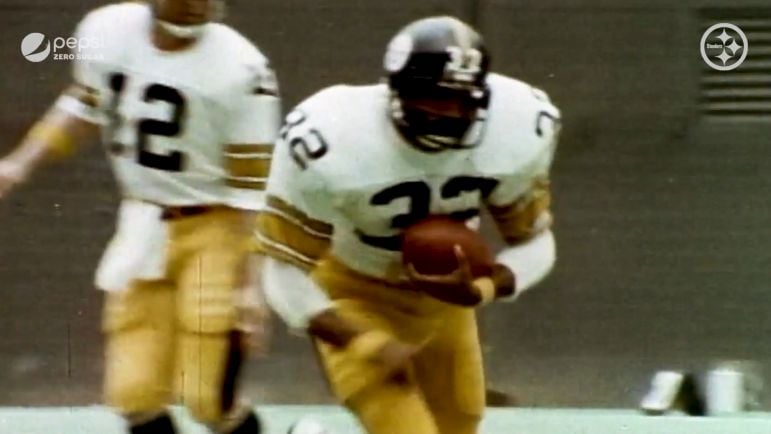 The Pittsburgh Steelers family and the NFL world were dealt a sudden, shocking blow Wednesday morning as Steelers legend and Pro Football Hall of Famer Franco Harris died overnight at 72 years old, according to multiple reports.

Harris was set to be honored Saturday at Acrisure Stadium as the Steelers announced they were going to retire his No. 32, making him just the third player in franchise history alongside former teammate Joe Greene and former defensive lineman Ernie Stautner. The jersey retirement would be in addition to the Steelers celebrating the 50th Anniversary of arguably the greatest play in NFL history, that being the Immaculate Reception against the then-Oakland Raiders on Dec. 23, 1972.

That play came near the tail end of Harris’ rookie season, which changed the Steelers franchise forever.

A first-round draft pick in 1972 out of Penn St., Harris became one of the great players at his position in NFL history and served as a focal point for a dynastic Steelers team throughout the decade. A four-time Super Bowl champion, a nine-time Pro Bowler, a first-ballot Hall of Famer, and author of the most iconic play in football history, his legacy was set to be honored this weekend.

December 23 marks the anniversary of the play voted on as the greatest in NFL history, the Immaculate Reception, a game-winning Divisional Round touchdown over the Oakland Raiders in 1972 that marked the Steelers’ first postseason victory in franchise history.

Following news of his shocking death, many Steelers — past and present — reacted to the somber news of a Steelers legend gone far too soon, and just days away from his jersey retirement, from the likes of Jerome Bettis, Pat Freiermuth, and Ramon Foster, to Tony Dungy, Vince Williams, Bill Cowher and more.

Steeler Nation is going to be hurting this week. On the weekend of the 50th anniversary of the Immaculate Reception and the holidays too. pic.twitter.com/eXwQzh9JRB

Wow sad sad day in Pittsburgh. An amazing player but an even better person RIP. https://t.co/sv3rZ9tS2l

Woke up this morning to the devastating news that my friend Franco Harris passed away during the night. One of the kindest, gentlest men I have ever known. He was a great person & great teammate. Hall of Fame player but so much more than that. A tremendous role model for me! pic.twitter.com/OswJ82x7I1

We have lost an Icon in Franco Harris. He embodied Pgh in his Grace, Humility, & Sense of Pride. He was a Champion on the Field & Ambassador off it. Thank you Franco for setting the standard that we all strive to achieve as a Professional & as a Person. RIP & condolences to Dana. pic.twitter.com/3GtCgOpeOW

Words can’t begin to describe the pain I am feeling. Franco will always be a brother, mentor and my definition of greatness. He was a legend on the field and the personification of excellence off of the field– A true class act to look up to and aspire to be like. RIP #32 🙏🏿 pic.twitter.com/WOYU4qCZDP

To the man who announced me as a Pittsburgh Steeler, May you Rest in Peace. Very thankful for our friendship and you always being there for me when I needed it. Penn State and Steeler Legend forever. May your legacy live on forever. RIP 32.🙏🏻 pic.twitter.com/95ajLaiD7M

.@ProFootballHOF QB Terry Bradshaw on @gmfb @nflnetwork on the passing of fellow @steelers legend Franco Harris: "He was just a great guy. I've known him forever. It's a sad day for sure."

Franco Harris will not only be remembered as a great player. His legacy will also be one of character and humility off of the field, as well as a dear friend of the Hall.

We are honored to have the opportunity to help tell his story and keep his legacy alive forever. #HOFForever pic.twitter.com/q5cAdn1Qnw

When I tell you that Mr. Harris was not only one of the nicest and welcoming sports legends I’ve ever met, but one of the greatest humans I’ve ever had the pleasure of knowing. The world has lost a great ambassador for football and humanity. #RIPFranco #SteelersNation pic.twitter.com/8LdrGYI6er

"Death is such sorrow, but at the same time, we celebrate death because we know he's going to Heaven with all of our Steelers teammates. Will he be missed? Certainly. But we will celebrate him, and the Italian Stallion is going to a better place." — Terry Bradshaw on @gmfb

Today we lost a Legend, not just on the field, but even more so off. Franco always had a smile and a hand shake or a hug for everyone, it seemed. Thank you for being a role model for us all! — Ben. pic.twitter.com/MqHRD2tgAv

Long live the Legend Franco Harris. Franco is Pittsburgh! I’m honored to have known him. Sending love and prayers to his family and the community 🙏🏽

Franco was a guy, a cool guy ! Much respect to him and his family! Prayers for the family and all of steeler nation!

Today we lost a legend and an incredible human being in Franco Harris. He epitomized what it meant to be a Steeler and a leader in the Pittsburgh community. Franco brought joy to everyone he was around and he will be missed. pic.twitter.com/YmMgwHqzno

We are heartbroken to hear about the passing of 4x Super Bowl Champion, Hall of Famer and the man behind the "Immaculate Reception,” Franco Harris.

Our thoughts are with his family and loved ones during this difficult time. Franco's legacy and impact will live on forever. pic.twitter.com/tmmQKo6IJ8

As great of a player Franco Harris was and making the greatest play in NFL History, he was a better human–and that is what I will miss.

He is the centerpiece of a city and a franchise that will never forget him. Love you Franco, RIP! pic.twitter.com/3b43nwEOSy

Rest In Peace to a great man who showed so much support for me. He was way more than just a athlete he was a icon and a role model to so many people. pic.twitter.com/tqsbDZptpE 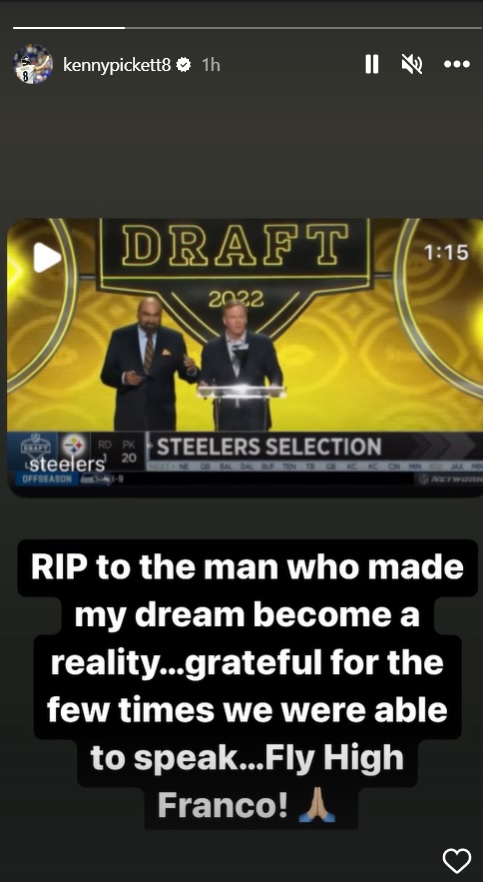 This is deeper than football … He wasn’t just YOUR icon • He was MY friend. For as long as I’m ALIVE even if others relent, I’ll never let 3️⃣2️⃣ end. @steelers #FrancoLives #RB34 pic.twitter.com/9YMJXsRqKp

Franco was one of the nicest person that I have met in my life. What a great model of humity and kindness. God is still in control. Psalms 31:15. pic.twitter.com/oFm1ONouZB

The ultimate Steeler. His actions on and off the field are truly inspirational. Rest easy Franco. https://t.co/P57ChaOIuP

Franco Harris is known for the glory he brought to football. But I knew him for his character and compassion – someone who spent time with my boys after we lost my first wife and infant daughter.

May God bless Franco Harris, a dear friend of 50 years and a great American. pic.twitter.com/YhOYr3a4IM

I grew up watching Franco Harris, and had the honor of getting to know him years later. He was an extraordinary man on and off the field, and will be missed. Our thoughts go out to his family and all of Steeler Nation.