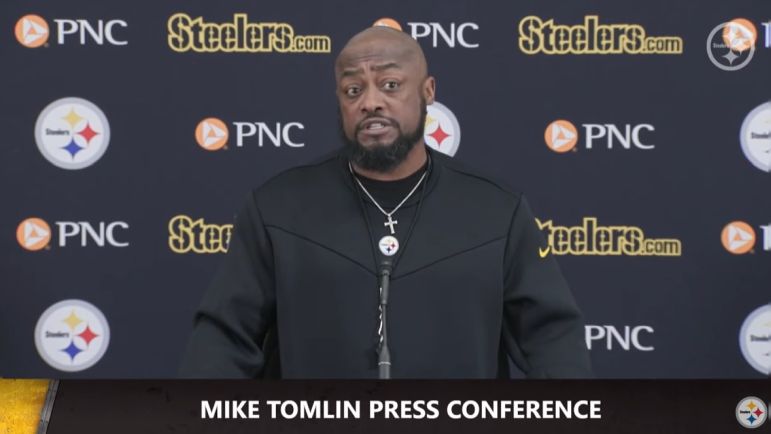 For Mike Tomlin, the only thing on his mind is what’s right in front of him. Having any chance to make the playoffs means his Steelers winning their final two games. Everything else is noise.

Speaking to reporters during his Tuesday morning press conference, held at 11 AM instead of noon (potentially related to the Franco Harris viewing later today), Tomlin said he’s taking it one day and one game at a time.

Pittsburgh started the year off on sour notes. After a big Week One upset victory over the Cincinnati Bengals, the team lost their next four. By the bye, they were 2-6 and blown out by the Buffalo Bills and Philadelphia Eagles and after a loss to the Bengals in late November, they fell to 3-7. But they’ve won four of their last five and though playoff hopes are slim, they aren’t zero.

Tomlin might not be sifting through playoff scenarios but we sure are. As Dave Bryan wrote yesterday, the most likely and probable path for the Steelers to make it is if the Miami Dolphins lose out, the New York Jets lose to the Seattle Seahawks this weekend, and the New England Patriots lose to the Buffalo Bills in Week 18. And, of course, the Steelers must win out. If those things happen, Pittsburgh will be 9-8 and the 7th seed.

There are other scenarios that involve ties and in the NFL’s ten-minute overtime world (not to mention what nearly happened to the Steelers last year) those can’t be discounted. But to keep it simple, that path above is the most likely scenario of all the improbable ones. With Steelers/Ravens being flexed and the Dolphins playing in the afternoon, it’s possible the Steelers are eliminated from postseason contention before even stepping onto the field Sunday night.

For Tomlin, he’s not spending his time playing around with playoff simulators. He’s gameplanning.

“We’re gonna stay focused on preparing and then ultimately playing this game.”

Looking back is fruitless but if there’s one loss that really hurts, it’s the Jets’ game. To be up two scores on Zach Wilson and blow a fourth quarter lead is difficult to wrap your head around. Wilson is arguably the league’s worst starter this year and the fact he came alive in the fourth quarter was a back-breaker that may have dug the Steelers too deep a hole to climb out of.