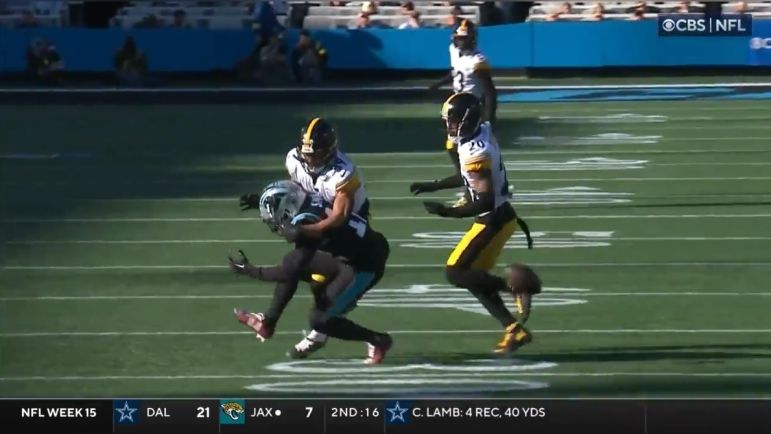 At first glance, it may seem like Minkah Fitzpatrick had a quiet day against the Carolina Panthers. Just one tackle thanks to him playing deep centerfield and the Pittsburgh Steelers’ front seven getting the job done. When they stop the run, he doesn’t have to make many tackles. When they don’t, like Week 14 against Baltimore, he has to make a bunch (11 in that game, a season-high).

But Fitzpatrick’s impact went beyond just making tackles. At his best, no one patrols the middle of the field like he does and Sam Darnold found out that was restricted airspace Sunday afternoon. Two clips to show that.

The first and most notable is a play revealed in the box score. 3rd and short. Panthers align 2×2 with the Steelers showing a two-high look pre-snap bit rotating to a three-deep/middle-of-the-field closed look on the snap of the ball, Fitzpatrick spinning down and Robbing/Lurking against any crossing pattern.

Carolina’s #2 receiver runs a shallow cross with #1 running a deep dig behind as a sort of levels concept. Trusting down/distance and tape, Fitzpatrick jumps and attacks #2 on the shallow cross, taking a great angle to the ball to meet the receiver at the catch point and break the ball up.

Just a great read, angle, and finish. There’s a risk here, a calculation to where the QB will go with the ball, but more often than not, Fitzpatrick makes the right decision. And does so here.

Later in the game. Red zone, big spot. Panthers again 2×2 with reduced/nasty splits that suggest crossers and benders. Steelers again in a three-deep shell with Fitzpatrick taking and jumping the crosser by D.J. Moore to the bottom. He’s their top receiver with a red zone touchdown already in that game so Fitzpatrick jumps it.

That appears to be Darnold’s first read and it’s taken away. Now, the other Panthers’ receiver crossing from the top to the bottom is getting open, potentially some miscommunication between Fitzpatrick and Sutton I’m not sure, but with Darnold’s first read taken away and him being under pressure, he can’t work to his second progression.

The play leads to a heavily pressured Darnold and incompletion. Here’s a look at the whole thing:

After the season, I’ll need to put together a clip of crossers Fitzpatrick has cut and robbed this year. That’s when he and this Steelers’ defense is playing great football. Having Fitzpatrick camp out in deep centerfield has some value but it’s easy for QBs to avoid him. When Fitzpatrick moves, he takes away important real estate and core concepts and makes quarterbacks reckon with him. And when they do, they pay the price. I could watch this stuff all day.

When Pro Bowl rosters are announced later today, Fitzpatrick’s name should be on it. It’s well-deserved.