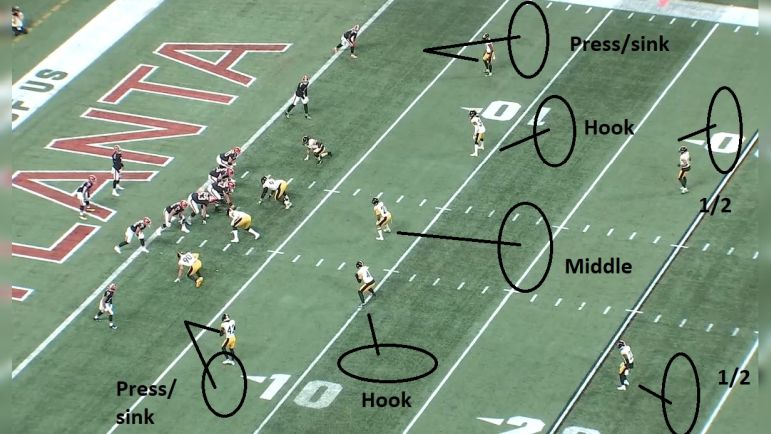 Sunday, Minkah Fitzpatrick called game. His pick of Marcus Mariota was the first he’s had since Week 4. His game had gone quiet in recent weeks with a couple of unMinkah-like performances. But he was all over the place against the Atlanta Falcons. Knifing into the backfield, making open field tackles, and finishing the game off with a fourth-quarter interception.

Breaking down the tape, the scheme wasn’t overly complex or nuanced. Just fundamental football and a great player making a great play.

Steelers running Cover 2, a common call on third and long and obvious pass situations. Sometimes you get a rotation but not here. Pittsburgh’s in their dime defense with Damontae Kazee as one of the two-deep safeties and Cam Sutton acting as the middle hole player with SS Terrell Edmunds over #2 to the top. A five-under, two-deep shell with the CBs carrying vertical, Sutton carrying the seam, and the underneath hook players playing their zone. Here’s how it looks. 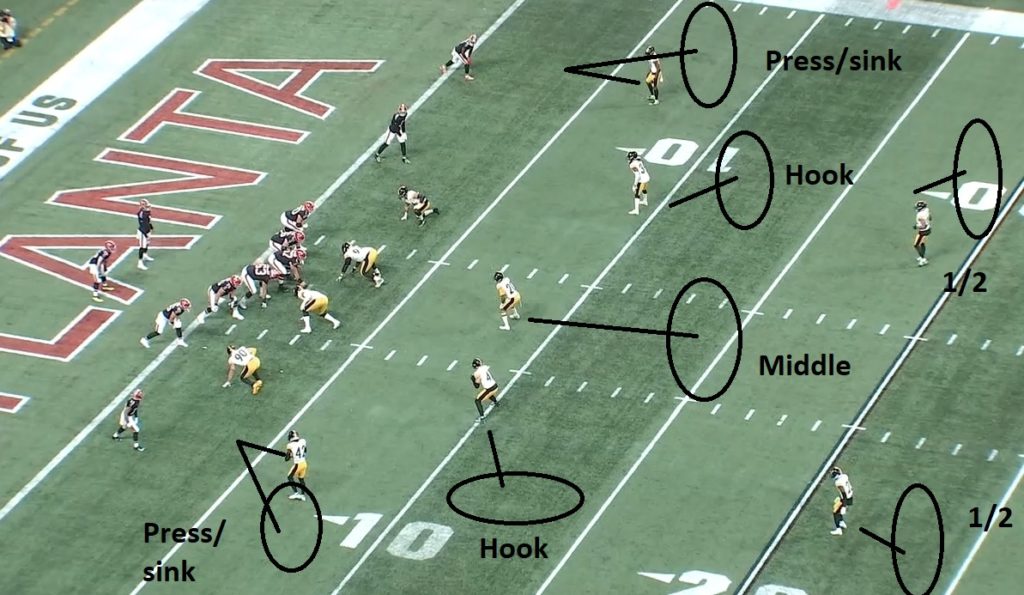 Here, Fitzpatrick has the deep half to the top. He has to carry and match any vertical concepts. But Fitzpatrick is really keying the ball the whole way. Eyes on QB Marcus Mariota, read, and drive on the football. After getting to his landmark (two yards inside the numbers) he breaks out of his pedal, drives, and undercuts this attempted throw down the seam to the slot receiver. Pick and ballgame.

Here’s a look at the whole play from the aerial All-22 view.

A highly selfless play to go out of bounds. It’s a walk-in touchdown if he wants it. But as he said, he just wanted to go home with the win instead of going back on the field and risking an injury to his defense.

There’s another component to this too. Cam Heyward applied pressure here with his patented bull rush that walks back poor center Drew Dalman, undersized and overwhelmed. Watch Heyward rev up that bull rush with his left leg and then walk Dalman into Mariota’s lap. Definitely impacted the throw, the ball comes out a little wobbly, which helps Fitzpatrick undercut it.

Watching Cam Heyward on the Minkah pick. He's revving up that bull rush. Gets that left leg dug in pre-snap like a sprinter in the blocks.

Walks the center into Mariota who throws the game-ending pick. #Steelers pic.twitter.com/UafmQMJyFu

As Dave Bryan likes to say, rush and cover going together. Get to the quarterback, get to the ball. A great finish to a big win.