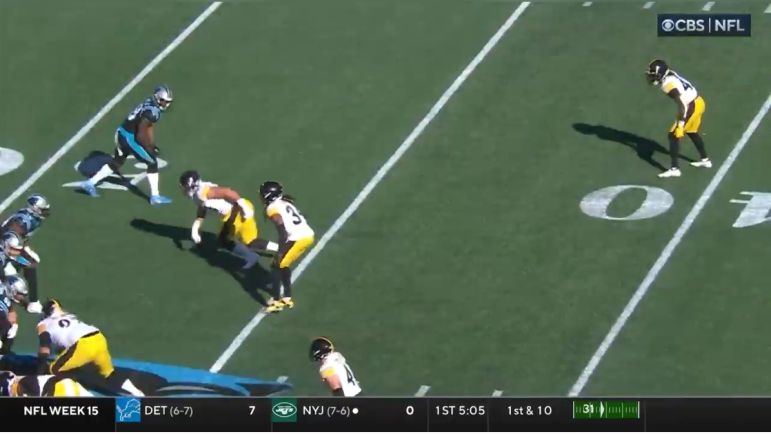 It is tough to find much to complain about following the Pittsburgh Steelers’ dominant, 24-16 road victory in Carolina, particularly defensively, with the unit holding the Panthers’ offense to just 209 total yards, a great figure in the modern era. Nonetheless, with the Steelers’ defense holding a powerful Panthers rushing attack to merely 21 yards on the ground, there is certainly room to criticize the back seven, which faced a one-dimensional Panthers offense all afternoon, aided further by consistent pressure from T.J. Watt, Alex Highsmith, Cam Heyward, and company.

Sam Darnold, hardly a household name at the quarterback position, was able to put together an efficient, albeit quiet, afternoon, finishing the game with 14 completions on 24 attempts, good for 225 yards, a score, and no picks. Likewise, Darnold exited the game with a healthy passer rating of 108.1 and a solid 9.8 yards per attempt, although it is important to note that he was sacked four times, with those four takedowns producing 37 yards lost.

Many, including myself, at points this season, have called for CB James Pierre to be utilized in a larger role on obvious passing downs. Over the course of the season, Pierre has produced splash at times, with an impressive pick, three passes defended, and a fumble recovery. All that being said, Pierre has struggled with consistency this season, just as he did the year prior. A natural gambler at the cornerback position, I have few issues with Pierre’s aggressive play style, even if it leaves him on the wrong end of double moves from time to time. Ultimately, cornerbacks are going to get beat, even beat deep, at times, it is the nature of the position, particularly when playing on Sundays.

My major issue with Pierre’s game stems from what I perceive to be coverage miscommunications or missed assignments. While NFL receivers will undeniably get open, occasionally for explosive plays, throughout the course of a game, blown coverages, which often produce uncontested explosive plays, are simply inexcusable. While he might have the best pure ball skills of the trio, Cam Sutton and Levi Wallace are able to provide a steady presence on the backend both through their understanding of their own individual assignments, as well as their understanding of the broader defensive scheme. Until Pierre is able to demonstrate the ability to be an effective communicator on the backend and eliminate instances of miscommunication in zone coverage assignments, it will be tough for him to elevate into the role of a full-time starter on the boundary.

After an impressive 12-play, 67-yard touchdown drive, which put the Steelers up 7-0, the Steelers defense had Darnold and company facing a tough 3rd and 13 situation just past midfield. With the Panthers’ offense backed up, Teryl Austin and company chose to rush four, showing a two-high shell pre-snap before rotating into a Cover 3 “sky” look at the snap, opting to force the ball short of the sticks, where the zone defenders could rally and tackle the catch short of the sticks.

Pre-snap James Pierre, aligned as the boundary corner, is notably a full two yards tighter to the line of scrimmage than Levi Wallace, with both players set to function as deep ⅓ defenders. At the snap, Pierre rolls down another yard, squaring up into catch technique posture with outside leverage. Inexplicably, as Terrace Marshall works vertically, Pierre opens the gate, allowing Marshall to release freely up the sideline on the fade route.

As Pierre carries Marshall up the sideline from trail technique, he continues to key the quarterback in his crossover run, glancing twice before finally breaking into a full sprint, closing on Marshall’s near hip. It is reasonable to assume that even with his coverage miscue, Pierre could have arrived in time to play through the hands and disrupt the catch point on the underthrown ball if he had more urgency in closing from a trailing position.

While it’s impossible to confirm, it appears that Pierre thought that he was operating as a flat zone defender in some variation of Cover 2, whereas the other 10 defenders on the field operated in a traditional Cover 3 “sky” assignment. Pierre’s posture, both pre and post snap, as well as his lack of immediate urgency in closing to the near hip once put into a trailing position, suggest that he thought that he was funneling Marshall to a deep ½ safety. It appears that Pierre first notices that he is responsible for the deep ⅓ when he gains vision of Terrell Edmunds pushing from the box out to the flat.

The old adage in football goes “if you’re all wrong, you’re right”, in other words, speaking in terms of defensive schematics, as long as all 11 defenders are on the same page, even a poor scheme can function at a high level. As with any miscommunication, the one seen above can not be placed fully on Pierre, as communication needs to be echoed throughout all three levels of the defense, with the safeties facilitating much of the communication to the secondary. Nonetheless, with Pierre aligned to the team’s sideline, his misunderstanding of the assignment is even less excusable.

Two plays later, Darnold would connect with DJ Moore for a score, the only points the Panthers would score in the first half. Had the Steelers fallen short of victory, ceding a conversation 3rd and 13 via blown coverage would be a primary reason. Even in victory, it allowed the Panthers to hang around in a game in which they had no business competing in, particularly as a run-centric offense that was kept well behind the chains all afternoon. While James Pierre has certainly shown flashes of brilliance in his young NFL career, mental mistakes and lack of consistency continue to represent speed bumps in his development and make it tough to picture this team entering 2023 relying on him as a full-time boundary starter.