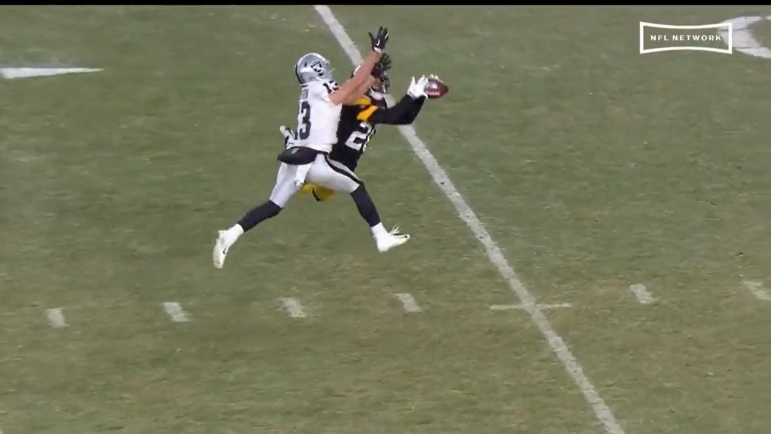 Cameron Sutton, in the midst of a career year at age 27, may have had his best game of the season on Christmas Eve vs the Raiders, an effort which he capped off with a game-sealing interception. Originally a sub-package fixture, Sutton has become an every-down player for Pittsburgh, playing every defensive snap for the eighth consecutive week on Saturday night. In total, Sutton finished the game with three tackles, a pick, and a pair of passes defended, marking his third game this season with multiple passes defended.

In total, Sutton is posting career-best numbers in completion percentage allowed (48.5%), interceptions (three), and passes defended (14). Additionally, his missed tackle percentage (9.5%) and passer rating when targeted (67.3) are his best figures since 2018 and 2019 respectively, both seasons prior to his ascension to full-time starter status. Needless to say, whatever the price may be this offseason, Cam Sutton is a massive piece of what makes the Steelers’ defense function, and he must be retained at all costs. In addition to serving as the team’s top cover man on the boundary, Sutton remains a versatile slot and dime defender, capable of executing any zone coverage assignments, and virtually playing every position in the secondary when factoring in post-snap rotations.

Simply put, Cam Sutton’s don’t grow on trees, and his skillset and football IQ are not easily replaceable. With his high-level football IQ, the Steelers are able to use him as a post safety in their Inverted Cover 3, a deep 1/2 safety in their Inverted Cover 2, as well as traveling him all over the field to match the opposing team’s top receiving threats, as they did at times vs Davante Adams on Saturday night. Alongside Minkah Fitzpatrick, I strongly believe that Cam Sutton is a long-term building block in this current Steelers secondary, and should be retained on a long-term deal this offseason.

The primary element of the Steelers’ game plan in limiting Adams centered around limiting situations where he would face isolated man coverage matchups. This included times when facing the Raiders’ RPO looks, where they would choose to stay in a two-high shell, daring the Raiders to hand the ball off. Below, understanding that he has help from Minkah Fitzpatrick over the top, Cam Sutton is able to stay aggressive guarding Adams from a cut split. At the snap, Sutton flat foot reads Adams from six yards depth, squaring up at the snap and breaking in unison with Adams on the five-yard out route. Needless to say, if Carr were to have pulled this one, Sutton is likely heading the other way for an early pick-six.

As a cornerback who began his career as a sub-package exclusive defender, Sutton’s off-man coverage has always been a strong suit of his game. Below, Sutton aligns at six yards depth with outside leverage, matched up in man coverage on Mack Hollins. At the snap, Sutton weaves back inside to establish inside leverage, flipping his hips to match Hollins outside release. As Hollins plants his outside foot in the ground to break back inside, Sutton seamlessly executes a speed turn to stay in phase on the top shoulder. While he may not be the most athletic corner in the league, his movement skills, hip mobility, and footwork, are certainly among the top at his position.

Playing cornerback at any level, particularly in the NFL, great throws can, and at times, will always beat perfect coverage. With the Raiders facing third and seven on the game’s opening drive, Sutton is tasked with matching Hunter Renfrow, working out of the slot in a Cover 2 man look. Pre-snap, Sutton bluffs the Nickel blitz before opening to match the receiver with inside leverage, closing to the upfield shoulder, turning to locate the football, and diving with his offhand extended, just missing the pass breakup.

While Renfrow would ultimately turn upfield for a touchdown, as Sutton had left his feet, his technique was picture-perfect on this rep, causing Derek Carr to beat the tight coverage with a well-timed and on-target ball. I can guarantee that Teryl Austin and company won’t have too many complaints about this one, outside of a woeful tackle attempt by Tre Norwood, who could have stopped this one well shy of the end zone.

With the amount of attention the Steelers paid to Davante Adams on Saturday night, the Raiders were forced to get creative with his route tree. Below, Sutton is matched up to Adams’ side in a Cover 4 quarters look, which as any defensive coordinator will tell you, essentially becomes man coverage with any vertical release, demarcated as anything that breaks beyond five yards.

At the snap, Sutton plays from five yards depth in a side shuffle, keying the quarterback’s drop, and weaving for width and depth to maintain outside leverage vs Adams’s outside stem. As Adams breaks outside, Sutton opens his hips to match the break, cutting off Adams’s top shoulder as he breaks upfield on what appears to be an out-and-up double move. Playing from the upfield shoulder, Sutton is able to keep vision on the quarterback and break in unison with Adams as he works back toward the sideline, contesting the catch point and ensuring the ball is caught out of bounds.

Once again, if this ball is left further inside or upfield by Carr, Sutton is likely securing an interception with room to run down the sideline. This is an elite rep from Sutton, showcasing his route recognition, fluidity in movement, and discipline in coverage to withstand a triple move from one of the game’s best receivers.

On one of my personal favorite reps of the night, the Steelers break out their Cover 1, bracket 17 (Adams) concept, with Pierre in press coverage in the slot, working an effective double team with Kazee, who plays from depth. This bracket coverage effectively keeps Carr from looking to target Adams, forcing him to look elsewhere. Cam Sutton is tasked with matching Hunter Renfrow on the over route, with post safety help.

Sutton does a great job, aligning from outside leverage before weaving inside to match an inside stem, squaring the receiver up, establishing contact on Renfrow’s break, and undercutting the route to force the incompletion. Through their gameplan, Pittsburgh was able to force Vegas to target their best cover man, Sutton, in key situations with Hunter Renfrow, who regardless of his success, is Vegas’s third option in the pass game. Defense is all about dictating matchups, and only allowing offense’s to take shots in matchups where you allow them to.

One of the more interesting ways that Pittsburgh attacked the Adams matchup was blitzing out of it. Below, the Steelers call a five-man pressure, with Cover 1 behind it. At the snap, Minkah is aligned in press coverage on Adams, with Sutton playing from depth to cap the blitzer. At the snap, Minkah blitzes off the edge untouched, forcing Carr to scramble and ultimately be taken down by Cam Heyward.

Knowing that Carr would want to throw hot on the blitz to his best target, Sutton once again plays from a flat foot read, this time with no safety help, breaking in unison with the speed out. Had Carr attempted to throw hot on the blitz, the pressured throw would likely have been picked off, if not broken up by Cam Sutton. This perfectly designed and executed blitz was one of the more aggressive approaches to mitigating Adams impact, and produced a game-changing play late in the second half.

Finally, the crown jewel of an elite night from Sutton, and quite possibly the best highlight of his six-year tenure in Pittsburgh, a late game-sealing interception, playing as a deep ½ safety in an Inverted Cover 2 look. With Sutton aligned from depth as the slot cornerback pre-snap, he opens to gain width and depth, splitting the hashes and numbers to match the vertical releases of Davante Adams and Hunter Renfrow.

As he squares up, Sutton has the proper depth to midpoint the vertical releases of both receivers. As the receivers continue to work downfield, Sutton opens into a crossover run, maintaining cushion to break on either receiver with vision on Derek Carr. As Carr releases the ball deep on a post to Hunter Renfrow, Sutton, expecting some middle-of-the-field help from Minkah Fitzpatrick, the seam dropper in the coverage, is overleveraged.

Showing no sign of panic, Sutton took off towards the post, aiming to cut off Renfrow’s upfield shoulder, and put himself in position to play the catch point. As the ball travels through the air, Sutton ranges from the numbers to the hashes, arriving at the catch point to secure a diving interception on an overthrown ball from Carr, sealing the game in the process. While the Raiders were able to successfully scheme the Steelers coverage by conflicting their seam dropper, Minkah Fitzpatrick, with a dig/post combination, opening up room for the post, Sutton’s ability to maintain his depth early in the rep kept him in position to cover for the safety, saving the game in the process. With this spectacular individual play, Sutton once again shows his insane football IQ, as regardless of talent, I’d argue that you would be hard-pressed to find five boundary cornerbacks across the league that have the football IQ and skillset to make this play from this coverage assignment.

All things considered, the efforts of Cam Sutton, Levi Wallace, Minkah Fitzpatrick, James Pierre, and the rest of the Steeler’s secondary contributed to a dominant defensive effort, allowing just 10 points, 201 total yards, and just 13 first downs, to go along with a second-half shutout, with all three takeaways coming in the second half. While the offense is finally starting to come along a bit, this Steelers team still undoubtedly wins through its defensive prowess, allowing just 14 points per game over their last three contests.

While playoffs remain unlikely, an upcoming Sunday Night road contest against the archrival Baltimore Ravens serves as a great opportunity for Pickett, Pickens, Freiermuth, Harris, and the team’s young offensive line to come through and battle in primetime against an elite defense. Finishing the season on a high note with a pair of division wins could set the team up for further success in 2023, regardless of a longshot playoff appearance.