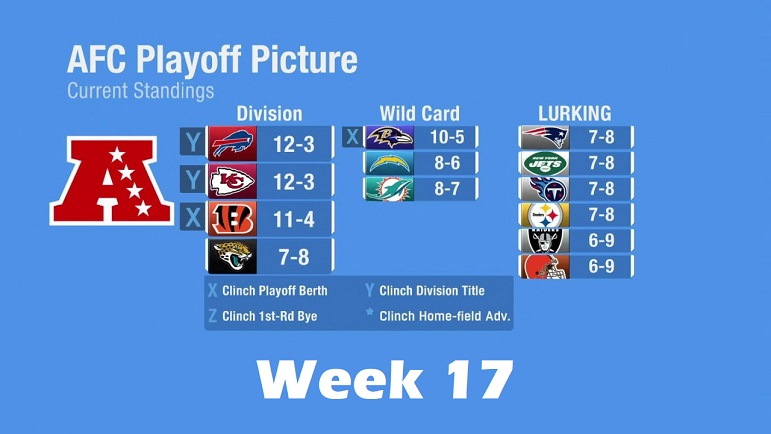 The Los Angeles Chargers beat the Indianapolis Colts on Monday night to close out week 16 of the 2022 NFL regular season and in doing so, they secured a playoff spot. That win by the Chargers also took away a set of scenarios that could have helped aid the Pittsburgh Steelers getting into the playoffs. With Week 17 now upon us and with an updated set of playoff scenarios in hand when it comes to the Steelers, let’s take a quick look at the key games this week that directly impact the team or that could impact them should they ultimately get to Week 18 with a chance at securing a playoff spot.

New York Jets at Seattle Seahawks – Sunday, 4:05 p.m. ET – The Jets can’t finish at 9-8 when the smoke clears and that would require them to win their final two games. The best scenario for the Steelers when it comes to the Jets on Sunday afternoon is that they lose to the Seahawks. Should the Jets beat the Seahawks on Sunday, and if the Dolphins don’t beat or tie the Patriots earlier in the day, the Steelers’ Sunday night game will still have a tiny bit of significance. However, that path would require the Jets to tie the Dolphins in Week 18. The good news is that the Seahawks still have something to play for on Sunday. Additionally, the Jets will be starting quarterback Mike White, who will be playing his first game since suffering a rib injury a few weeks ago. The Jets are currently 2.5-point road favorites, however.

Dallas Cowboys at Tennessee Titans – Thursday, 8:15 p.m. ET & Jacksonville Jaguars at Houston Texans – Sunday, 1:00 p.m. ET – Quite a bit must happen for the Tennessee Titans and Jacksonville Jaguars to both figures into the Steelers’ playoff chances. In fact, the only scenario that happens in includes the Steelers tying one of their final two games, which obviously isn’t ideal. That worst-case scenario includes the Titans and Jaguars playing to a tie in Week 18 and only after both winning their respective Week 17 games. So, in short, should one of the Titans or Jaguars lose or tie in Week 17, neither team will play into a Steelers’ scenario that includes them tying one of their final two games.

Best-Case Week 17 Scenario Recap: The best thing that can happen to the Steelers in Week 17 is for the Dolphins to lose to the Patriots, the Jets to lose to the Seahawks, and at least one of either the Titans or Jaguars losing or tying. It goes without saying that the Steelers really need to beat the Ravens on Sunday night as well. That game will have some meaning as long as the Dolphins don’t win or tie on Sunday.