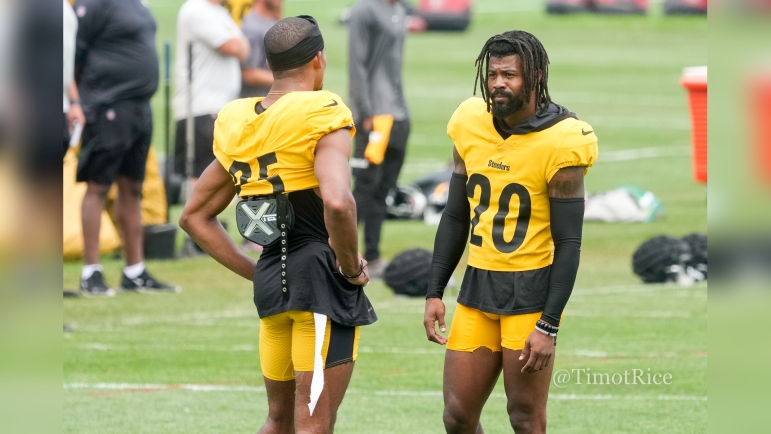 Injuries and attrition are the names of the game when navigating an NFL schedule, especially for a team like the Pittsburgh Steelers, who are trying to maintain Head Coach Mike Tomlin’s non-losing season streak that has stood the test of time since he took over as head coach back in 2007.

This has rung true for the team thus far this season when last year’s league Defensive Player of the Year T.J. Watt injured his pectoral muscle in the first game of the season and didn’t return until Week 10. And if you think he didn’t make an impact, the team went 2-6 without him in the lineup and has since gone 5-2 with his return.

The team gained some positive news today in regards to an important reinforcement to their secondary when cornerback Ahkello Witherspoon returned to the practice field. He’s been out since being placed on the Reserved/Injured List since December 3rd due to a lingering hamstring injury, and based on his comments today, it’s clear he’s ready to put his hand in the pile to help guide this team to a postseason berth.

“I am excited to be healthy playing football,” Witherspoon said via Steelers.com’s Teresa Varley. “That is what I have been working for every single day and having the opportunity to be back out there and fly around with my brothers is everything to me.”

His presence in the secondary will be a tremendous boost, and is magnified even more so after three members of the unit came away with interceptions in the team’s 13-10 victory on Christmas Eve. Witherspoon was a key free agent who was retained after a strong season last year in which he led Pittsburgh with three interceptions.

Whether or not he’s inserted directly into the starting lineup remains to be seen and there’s a chance he isn’t activated at all for the game. But if he is, he could have a role in limiting a Ravens’ passing attack that may yet again be missing their franchise quarterback in Lamar Jackson, who failed to practice Wednesday. The presumed starter will be Tyler Huntley, who was knocked from the Ravens’ 16-14 victory over Pittsburgh just three weeks ago.

As Tomlin has famously stated time and time again, he wants “volunteers, not hostages” and it’s clear Witherspoon is chomping at the bit to help his team make a surprise playoff entry. While they need several things to bounce their way, including the Dolphins losing out, the team can only control what’s in front of them, and that starts with dismantling their arch-rivals, the Ravens, Sunday evening.